LAS VEGAS (KTNV) - Another private guardian was charged with abuse of a vulnerable person on Thursday.

The young victim in the case was the first to come forward and talk with Contact 13 about corruption in the guardianship system.

Jason Hanson's guardianship case was supposed to end when he became an adult. But Contact 13 discovered the court kept it open for seven years after his 18th birthday. And during that time, several so-called professionals came in and out of his life while the money set aside for his care dwindled away.

Jason has Cerebral Palsy. He's mentally competent, but has special physical needs as he's confined to a wheelchair.

Susan Rousselle was appointed as guardian by the court to look after Jason when he was 16 after his father died. The court later appointed her as trustee of Hanson's special needs account, which was established for his care by an inheritance from his grandmother.

But a grand jury indictment accuses Rousselle of stealing more than $50,000 from that account and using it for her own personal benefit. She's facing 44 felony counts of theft and exploitation. 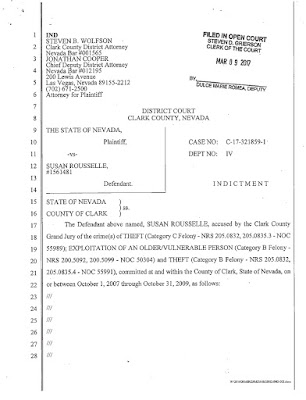 I'm glad to see the spotlight shining on Jason's case.