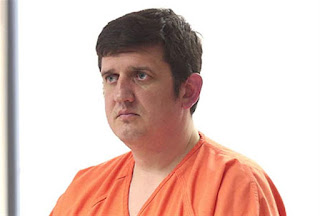 BOWLING GREEN — A local lawyer found himself on the wrong side of the defendant's table Tuesday as he was arraigned on 14 felonies charging him with stealing more than $400,000 from a client.

Robert Searfoss III, 40, of Perrysburg was named in a secret indictment handed up by a Wood County grand jury last week charging him with two counts of aggravated theft, four counts of engaging in a pattern of corrupt activity, four counts of money laundering, three counts of theft, and one count of grand theft.

The indictment alleges that between April, 2015, and April, 2017, Mr. Searfoss stole about $435,000 from Eric Walker and the Alice C. Walker Revocable Trust, for which he was the trustee.

The indictment includes numerous specifications that seek forfeiture of real estate he owned on Georgetown Drive in Bowling Green and Shawnee Drive in Perrysburg, his law practice on Oak Street in Bowling Green, and two vehicles.

Mr. Searfoss appeared in court shackled and wearing an orange jail jumpsuit and was returned to the Wood County jail on $500,000 bond.

His court-appointed attorney, Kurt Bruderly, had asked the court for some kind of supervised recognizance bond saying Mr. Searfoss would voluntarily surrender his law license, reside with his parents in Bowling Green, and seek a “blue-collar” job.

“A search warrant was executed at his residence about six days prior to this, and he did not flee the area,” Mr. Bruderly said. “He remained in … the Wood County area. He had every opportunity to know what was coming and flee, but he did not do that.”

Thomas Matuszak, chief assistant county prosecutor, told the court that Mr. Searfoss had a pending disciplinary case before the Ohio Supreme Court and an outstanding arrest warrant issued in Michigan.

“We have not been able to trace all of the stolen proceeds, which is believed to be in the neighborhood of $435,000, so the defendant might have the ability to post some sort of cash bail or bond,” Mr. Matuszak said.

“Given the Michigan warrant, given the number and severity of the counts as well as the [potential] forfeiture and fines, it would appear that there is a risk that the defendant may not appear,” the judge said. “Given that, the court would set bond sufficient to cover the alleged amount” of stolen funds.

Wood County Prosecutor Paul Dobson said members of the public often entrust their attorney with large sums of money, for a variety of reasons.

“Lawyers operate in a system of trust,” Mr. Dobson said. “As lawyers, we take that position very seriously and are intolerant of allegations of violations of that trust.”

Mr. Bruderly said Mr. Searfoss, a father of seven children, has a child living in Grand Traverse County, Mich., and the warrant from there was likely related to missed child-support payments.

A graduate of the University of Toledo college of law, Mr. Searfoss established his law practice in 2007 and was “committed to clients,” the firm's Facebook page says.

Lawyers are the best thieves. They know how to do it and mostly get away with it.

I hope he goes away to jail until he's old and has time to think about what he's done and if it was worth it.