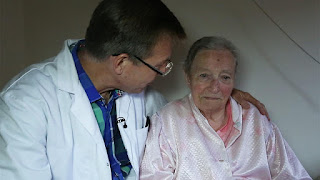 Yesterday the Oregon Senate Rules Committee passed out Senate Bill 494 on a party-line vote. Touted as a “simple update” to Oregon’s current advance directive, this bill is designed to allow for the starving and dehydrating to death of patients with dementia or mental illness.

Senate Bill 494 is little more than the state colluding with the healthcare industry to save money on the backs of mentally ill and dementia patients. This bill would remove current safeguards in Oregon’s advance directive statute that protect conscious patients’ access to ordinary food and water when they no longer have the ability to make decisions about their own care.

“It’s appalling what the Senate Rules Committee just voted to do,” said Gayle Atteberry, Oregon Right to Life executive director. “This bill, written in a deceiving manner, has as its goal to save money at the expense of starving and dehydrating dementia and mentally ill patients to death.”

“Oregon law currently has strong safeguards to protect patients who are no longer able to make decisions for themselves,” said Atteberry. “Nursing homes and other organizations dedicated to protecting vulnerable patients work hard to make sure patients receive the food and water they need. Senate Bill 494, pushed hard by the insurance lobby, would take patient care a step backwards and decimate patient rights.”

“Oregon Right to Life is committed to fighting this terrible legislation every step of the way,” said Atteberry. “We have already seen the outrage of countless Oregonians that the Legislature would consider putting them in danger. We expect the grassroots response to only increase.”

SB 494 was amended in committee yesterday. However, the amendments did not solve the fundamental problem with the bill. To learn more about what SB 494 will do, please watch testimony made to the Rules Committee on behalf of Oregon Right to Life yesterday by clicking here. SB 494 likely heads to a vote of the full State Senate in the coming weeks.

“There is a clear effort to move state policy away from protecting the rights of patients with dementia and mental illness and toward empowering surrogates to make life-ending decisions,” Atteberry said.

Senate Bill 494 makes many changes to advance directive law, eliminating definitions that can leave a patient’s directions left open to interpretation. SB 494 would also create a committee, appointed rather than elected, that can make future changes to the advance directive without approval from the Oregon Legislature. This could easily result in further erosion of patient rights.

This is outrageous. How long will it be before an investigation is done and hundreds of people have already died?

This is outrageous and inhumane. You can not seriously do this to a mental Ill person can you?