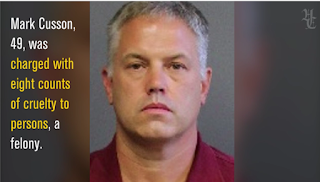 Mark Cusson, the supervisory forensic nurse on third shift at the maximum security Whiting psychiatric hospital, seemed to lead by example, with other workers either joining him as he rained abuse on a patient in the early morning hours, or watching mutely as it happened, according to warrants unsealed Wednesday in the widening abuse scandal.

Cusson maintains his innocence and his lawyer, Brian Woolf of East Hartford, has said he and his client expect a favorable outcome of the criminal case.

The warrant affidavits for the nine staff members arrested in the case are each a little different — tailored by state police detectives to the maltreatment they observed in hours and hours of surveillance tape shot from a camera in the 62-year-old patient’s room. Allegations in the other warrants include workers placing a dirty diaper on the patient’s head and wrapping a sheet around his head and over his face.

Cusson was charged with eight counts of cruelty to persons, a felony — the most of the nine defendants charged in a scandal that has seen 31 workers suspended. Another three Whiting employees, including another forensic head nurse, were transferred from their jobs as new abuse allegations involving the same patient, surfacing in recent days, are investigated internally.

Writing in support of Cusson’s arrest, state police Det. Matthew Geddes said Whiting’s director of nursing, Renata Kozak, contacted police officers with the Department of Mental Health and Addiction Services, the agency overseeing Connecticut Valley Hospital and its Whiting Forensic Divsion, and said she had received a report from an agency employee “alleging abuse” against the patient.

Kozak, who herself has been suspended, told DMHAS police that she was “requesting the video recording from the patient’s room” in unit 6 at Whiting “be downloaded and saved onto a DVD disc for viewing,” the warrant states.

The warrant doesn’t answer a question asked by patient-rights advocates, the patient’s co-conservator, and critics of the way Gov. Dannel P. Malloy and DMHAS Commissioner Miriam Delphin-Rittmon have responded to the scandal:

Why didn’t one of the many layers of DMHAS and Whiting management catch the videotaped abuse while it was happening or soon after?

A recent investigation by the state Department of Public Health found that the video monitors and the tape-recordings were not routinely viewed, prompting Sen. Heather Somers, R-Groton, the co-chair of the legislature’s public health committee, to ask, among other things, how the state’s mental health system can have a surveillance setup and not use it.

After detailing episodes of Cusson allegedly kicking the patient in bed, or trapping the patient’s neck between his legs in a “scissor hold,” or putting his foot on the patient’s head and pushing down, the warrant describes one of the more jarring acts attributed to him:

It's one of the reasons we're all terrified to even think about ending up in a nursing home.