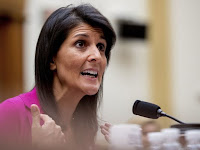 COLUMBIA — United Nations Ambassador and former Gov. Nikki Haley has been served with an order to testify in a Greenville man's federal disability lawsuit after a judge dismissed objections by Gov. Henry McMaster.

Court records show one of her attorneys, James W. Fayssoux Jr. of Greenville, agreed on Oct. 5 to accept service of the order on behalf of Haley. He could not be reached for comment.

Whether Haley testifies, however, is still not certain because she had not been represented in the case by her own counsel until this month and her attorneys could object to her testimony.

U.S. District Judge Mary Geiger Lewis earlier this month dismissed concerns by McMaster's lawyers about Haley's testimony and directed that she be served with her order and that lawyers for the plaintiffs accommodate her UN schedule.

"To the extent defendant McMaster makes arguments on behalf of defendant Haley regarding the effectiveness of service and whether defendant Haley is being sued in her individual capacity, the Court rejects those contentions inasmuch as those issues must be raised, if at all, by defendant Haley," the judge wrote.

The lawsuit filed last year while Haley was still governor alleges that Johnny Timpson of Greenville was beaten, burned, subjected to physical, emotional, sexual abuse, neglect and financial exploitation while in the state Department of Disabilities and Special Needs system. He has named a number of defendants in addition to Haley, including state and local agencies and officials.

The suit seeks unspecified damages, including punitive damages, attorneys fees, compensation for Timpson's sister and various orders, including one to prohibit defendants from retaliating against plaintiffs, witnesses or their advocates.

Timpson was in the care of DDSN system facilities, including an Anderson County Disabilities and Special Needs Board group home from about 1968 to 2013, according to his family. His sister asked that she take over his care after finding burns on his arms in 2013, she said.

His allegations were reported by The Greenville News as part of a series examining the DDSN system and its problems, which include significant increases in abuse, neglect and exploitation allegations and critical-type incidents; critical state and federal audits; neglect and exploitation allegations, and critical incidents or deaths that exceed the state rates for many county disabilities agencies.

Haley is being sued, according to Judge Lewis, because the plaintiffs allege she "possessed personal knowledge of systemic abuse, neglect and exploitation of mentally disabled adults such as Timpson, failed to take reasonable action to protect them, and even retaliated against those who complained."

The Greenville News attempted to reach Haley through the U.S. Department of State and the UN scheduling office, where requests for interviews are sent. She could not be reached for comment.

The governor’s office lawyers had fought against Haley testifying, arguing that she should be dismissed from the litigation and asking for a protective order to prevent her deposition.

They also argued that too much time had lapsed, that Haley was an improper defendant and that Gov. Henry McMaster should be substituted for Haley since he is the current governor.

Judge Lewis ordered that a deposition be taken from Haley within 60 days of the order, which would be by Oct. 24.

According to court records, Haley also is represented by attorneys Paul Landis of Greenville and Butch Bowers, a Columbia lawyer who has represented Haley in the past.

Sandra Timpson has been caring for her disabled brother, Johnny, since discovering he had suffered years of abuse for years in the care of group homes. LAUREN PETRACCA/Staff Full Article & Source:
Former Gov. Nikki Haley served with order to testify in SC disability case
Posted by NASGA

That is going to be very interesting!