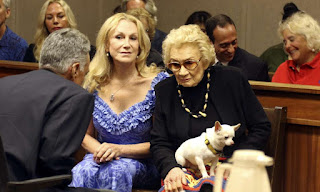 A Honolulu judge ruled this week that “Hawaii’s last princess” doesn’t have sufficient mental capacity to manage her $215m trust – the latest twist in a contentious legal battle surrounding 92-year-old Abigail Kawānanakoa and her fortune, and which has raised allegations of possible abuse.

Kawānanakoa is regarded by many Native Hawaiians as a princess because she is a descendent of the royal family that ruled the islands before the overthrow of the Hawaiian Kingdom in 1893. She’s also the great-granddaughter of sugar plantation owner James Campbell, a businessman who was one of Hawaii’s largest landowners and through whom Kawānanakoa has inherited her sizable estate, which includes ample real estate and cash assets.

Kawānanakoa has led a mostly private and luxurious life, donating to her favorite charities, and breeding American Quarter Horses, but also had a reputation for quietly paying people’s bills. For years, she paid the electricity bill at Honolulu’s Iolani Palace (the royal residence that’s since become a museum) and would chip in when people came to her with financial problems. In 2001, the heiress also established a $100m trust aimed at supporting Native Hawaiian language, culture, art, education health and housing.

“At the moment, she is a benefactor for the Hawaiian people,” said Lilikalā Kame’eleihiwa, director and professor at the University of Hawaii’s Center for Hawaiian Studies and a board member for Kawānanakoa’s trust. “I understand she paid some people’s student tuition or their medical bills – she even paid people’s mortgages to keep them from becoming homeless.”

But trouble began last year when Kawānanakoa had a stroke. Soon after, her longtime former attorney Jim Wright said she was no longer able to serve as trustee and stepped in. But then Kawānanakoa declared she was fine and took a series of hasty steps that seemed out of character. She fired Wright, married her girlfriend of two decades, Veronica Gail Worth, and hired another lawyer. Before a court hearing on Monday, her lawyer said she wanted to remove Wright and appoint new trustees, including her wife, Worth.

In a nod to Kawānanakoa’s wishes, the judge Monday removed Wright as trustee, but appointed First Hawaiian Bank in his place. He said that he believed Kawānanakoa was able to decide that she wanted a trustee replaced, but that it was more complicated to appoint someone new, and that he didn’t find her capable of managing her financial assets, according to Kawānanakoa’s attorney, Michael Lilly.

“I think it’s a great decision by the judge,” said Kame’eleihiwa. Kame’eleihiwa said that the bank now has the choice in keeping the existing board members, some of whom are prominent Native Hawaiians, or appointing new ones. But Kame’eleihiwa added that she still had concern for Kawānanakoa, who had seemed increasingly isolated after her stroke.

In court filings, Wright, the former attorney, alleged that Worth physically abused Kawānanakoa. Domestic workers who helped Kawānakoa supported the claims, alleging that they had seen abuse occur and witnessed Worth pressuring Kawānanakoa to add her name on her bank account, among other things. After the employees spoke with a court-appointed psychiatrist and judge appointee as part of the legal proceedings, they claimed that they’d been fired and told to leave the southwest Oahu home that Kawānanakoa owned and had let them live in. It was retaliation, they told Hawaii News Now.

Worth has denied the allegations of abuse, and blamed the princess’s bruises on accidental stumbles into furniture. But some board and community members are still concerned, said Kame’eleihiwa.
“The first thing we were worried about was the health of Abigail,” she said. “You should not have elders in a situation where they might be abused.”

Kawānanakoa’s attorney, Michael Lilly, told the Guardian that his client was considering whether to challenge Monday’s ruling, but happy that her former lawyer had been replaced.

“We’re pleased that Mr Wright is out (as trustee),” Lilly told the Guardian. “Abigail Kawānanakoa has a loving marriage and she has been in the news against her wishes. She needs and is entitled to be left alone.”

But of course ... their chance has come to take advantage of her.

I believe all her life they waited like vultures and when they saw the chance, they're on her.