From The Silver Standard’s Elder Abuse Reform Now Project: INSIDE THE BELLY OF THE BEAST: GUARDIANSHIP

A social worker employed by a professional guardianship company contacted me recently on my Facebook page, Boomers Against Elder Abuse. I was surprised because not many insiders are willing to open up when it comes to this secretive cottage industry. This legalized system of theft from elders and persons with disabilities is a secret world operating below the radar. The public is unaware of how this system works against the people it is supposed to protect because the courts involved in these proceedings do their best to keep guardianship matters secret. Records are sealed; gag orders and contempt-of-court charges are leveled against adult children of the victim if they choose to speak out.

The social worker said that at first she admired professional guardians because the guardian’s mission seemed purely to help those who could not care for themselves. Later, though, the social worker began to see gaping cracks in procedure. She didn’t go into details, but my guess is that she witnessed elders and others being snatched up into guardianships they didn’t need or want. 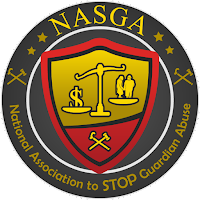 We hear nightmare stories every day at the National Association to Stop Guardian Abuse. One of the top complaints is that courts choose professional guardians over family members who are perfectly able to care for their elderly parents. Attorneys and guardians argue to the court that children of wealthy elders, in particular, have a conflict of interest due to the money they will inherit.

What about the fact that everyone in the courtroom will soon be paid out of the elder’s estate if the elder is deemed incapacitated? Isn’t that a conflict of interest? Every single person working on a guardianship case has a motive to draw a wealthy elder into the system because everybody will be on the payroll, and they get to charge the estate for services with almost no monitoring. The people about to “make bank” include a court visitor, a doctor who makes an assessment of incapacity, the guardian ad litem (an attorney appointed as an arm of the court to decide what’s in the prospective ward’s “best interest”), and anybody the guardian wishes to hire off the elder’s dime.

Another social worker told me that she knew of a guardian who found elderly victims to put into guardianships by investigating property tax records to see if any elders were behind in their payments. If taxes hadn’t been paid, she would approach the elder or others close to them and suggest that the elder needed help with paying bills and care. Then, her attorney would petition for guardianship over the unsuspecting victim.

Guardians and conservators for the elderly control billions, perhaps trillions, of dollars. There is no central database for guardianship registry. Many states don’t have records of all guardianship cases; therefore, there’s no way to really know how many wards are out there with their money being controlled by total strangers who may or may not have their best interests at heart.

Full Article & Source:
From The Silver Standard’s Elder Abuse Reform Now Project: INSIDE THE BELLY OF THE BEAST: GUARDIANSHIP