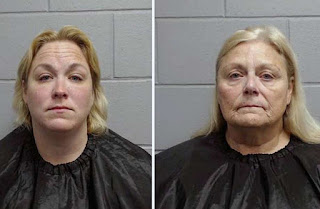 Bail has been set at $30,000 each for two women accused of taking more than $50,000 from an elderly relative — and prosecutors have filed a similar charge against a man serving 49 years in prison for a deadly 2015 shooting that brought the reported exploitation to light.

Although the charges are not directly related to the shooting, police said the investigation into that case spurred them to look into the financial dealings of the man charged in Andrew Maul’s death, as well as his wife and daughter.

Robert H. Gill, 64, was arrested in the Sept. 11, 2015, shooting and subsequently pleaded guilty. He now is charged with financial exploitation of an elderly person involving a relative.

“Gill was the guardian for the [relative] and it looks like he was removing money and putting it into his account,” Police Lt. Doug Thompson told the State Journal-Register.

Authorities maintain Gill’s daughter, Jewell Maul, 38 — the ex-wife of Andrew Maul — and Gill’s wife, Joyce Gill, 63, knew what was going on with the account and used it for withdrawals and deposits, according to WLDS News.

Both were charged Monday with Class 1 felonious financial exploitation of an elderly person. They were being held Tuesday in the Morgan County jail.

Robert Gill pleaded guilty in November to one count of intentional murder in Andrew Maul’s shooting death and was sentenced to 45 years. He was given another four years for one count of aggravated residential arson after setting fire to the home of Andrew Maul’s mother, Debbie Bartz, soon after the shooting.

As a part of the deal, three counts of murder and one count of residential arson were dismissed.