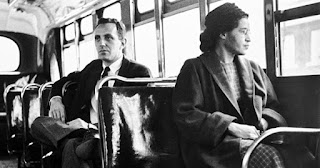 Detroit, MI — The charity organized by civil rights icon Rosa Parks has filed a petition for certiorari in the United States Supreme Court citing gross corruption in the probate court located in Mrs. Parks’ adopted hometown of Detroit, Michigan. The petition focuses on a dispute concerning the whereabouts of the wool coat worn by Mrs. Parks at the time of her arrest in Montgomery, Alabama on December 1, 1955. The famous coat was slated to be part of an exhibit of thousands of civil rights artifacts to be presented by the United States Library of Congress in December of this year. The coat will not be part of the exhibit due to the corruption of Judge Freddie G. Burton, Jr. the probate judge presiding over Mrs. Parks’ estate in the Wayne County Probate Court.

The estate of Mrs. Parks, who died in 2005, recently entered its 14th year of administration. Almost immediately upon commencing probate, Judge Burton disregarded Mrs. Parks’ express wishes for the management of her estate by her friend, Elaine Steele, and appointed two court cronies as administrators of her estate. By 2009, these cronies managed to completely bankrupt Mrs. Parks’ simple and modest estate by charging excessive administration fees that exceeded the gross value of these estate. When Mrs. Parks’ charity, the Rosa and Raymond Parks Institute for Self Development, the primary beneficiary of the estate, complained about these excessive fees Judge Burton charged the charity and its co-founder, Mrs. Steele, with contempt of court and imprisonment for exercising their rights. In further retaliation, in 2009 Judge Burton confiscated valuable civil rights artifacts and intellectual property belonging to the Institute and awarded this property to the court cronies, without any discernible basis and without conducting a trial or proceedings of any kind. Fortunately, the Michigan Supreme Court reversed these confiscations in 2011, returning the property to the Institute and ordering the immediate discharge of the court appointed cronies.

Unfortunately, Judge Burton did not change his corrupt practices. For the last eight years, Judge Burton has visited repeated travesties upon the Institute and Mrs. Steele in an effort to reverse their success in the Supreme Court. As set forth in the petition for certiorari, Judge Burton refused to enforce a contractual promise by the nieces and nephews of Rosa Parks to deliver the coat to the Institute for inclusion in the civil rights artifacts to be displayed by the Library of Congress. When the Institute sued for breach of contract, Judge Burton held that the coat was essentially worthless and dismissed the action, without trial or evidentiary proceedings of any kind.

The irony of Judge Burton’s backhanded administration of Mrs. Parks’ estate is inescapable, as there is little difference in the gross abuse of constitutional, ethical and moral dictates that occurred in Montgomery, Alabama on December 1, 1955 and the flagrant disregard of Mrs. Parks’ last wishes, theft of property and diminishment of her beneficiaries committed here under the cloak of judicial process. If uncorrected, Judge Burton’s re-victimization of Mrs. Parks will serve, at a minimum, as a lasting stain on our system of justice. The US Supreme Court is expected to issue a decision on whether to accept the case in approximately two months.

For more details about the petition, visit http://cohenandassociatespc.com/rosa_parks_litigation