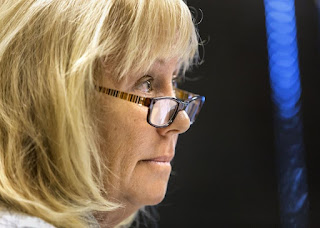 The state on Thursday revoked the registration of professional guardian Elizabeth “Betsy” Savitt, the wife of former guardianship Judge Martin Colin and the subject of criminal and administrative investigations based on complaints first reported in The Palm Beach Post.

The ruling by the Department of Elder Affairs came despite a December recommendation by an administrative law judge to drop disciplinary proceedings against Savitt. The judge had found that the new guardianship office lacked jurisdiction and failed to make its case.

But Elder Affairs’ reversed parts of the recommendation and the end result. The ruling should give Florida seniors and their families confidence that the state will do everything under the law to protect them, Elder Affairs Secretary Richard Prudom said.

“I hope our action today serves as a deterrent for anyone seeking to exploit individuals under guardianship.” Prudom said. “Revoking Ms. Savitt’s registration is simply the right thing to do based on her repeated bad behavior and shows our seriousness and commitment to removing those self-serving bad actors who act unlawfully.”

It marked the first time a professional guardian has been disciplined in Florida since the Legislature allowed such action in a 2016 reform package. The state’s new Office of Public and Professional Guardians called the ruling against Savitt “historic.”

Savitt eroded the public trust with “repeated violations of law” and deserved the harshest discipline available to prevent any further harm to the public, Berkowitz said.

Savitt can’t be appointed to any cases in Palm Beach County without her registration and faces removal from her current cases, the chief judge’s office has stated.

Savitt was the subject of a 2016 Palm Beach Post investigation that showed how lawyers who represented her also relied on her husband to approve fees in other cases, sometimes in the hundreds of thousands of dollars.

The inspector general of the Palm Beach County Clerk and Comptroller’s Office determined in March 2017 “that Savitt was involved with corruption and collusion of judges and lawyers in Delray Beach for financial gain.”

The clerk’s office received at least four calls about Savitt to its guardianship hotline and referred matters to the Palm Beach County State Attorney’s Office, which found no probable cause to charge her.

The guardianship office, relying on the newly passed state law, used the clerk’s report in its administrative complaint filed last year. It pointed out that Savitt, as first reported in The Post, took more than $20,000 in fees from the savings of her wards prior to judicial approval.

Savitt’s attorney responded to questions late Thursday night, claiming the process was rigged against her client and that the guardian would seek an appeal of the final order in the courts.

“It is important for the public to know that the plaintiff, the Department of Elder Affairs, who brought the administrative complaint against Ms. Savitt, and who lost in the trial before an independent judge who recommended that the complaint be dismissed, is the same party who is now deciding to overturn the independent judge and rule against Ms. Savitt,” Morris said in an email.

“Thank God, really. It is like a load off my back,” said James Vassallo, whose father was one of Savitt’s wards. “Finally, she is not going to be out there hurting anybody, taking money from the kids and grandkids and from hard-working people from the Depression days.”

Dr. Sam Sugar, the founder of American Against Abusive Probate Guardianship, was a key force in getting the Legislature to pass the reforms.

Sugar on Thursday praised the Department of Elder Affairs, heralding that it “has finally seen fit to take the bold and long overdue action of decertifying one of the many notorious professional guardians in Florida who for years have preyed upon seniors in our state.”

He added that he hoped the Savitt decision is “our long-awaited tipping point with the department and law enforcement to finally realize the danger posed by out-of-control abusive guardians.”

Colin and Savitt have long denied any wrongdoing. Savitt says she has never been removed as a guardian — though she has resigned from cases following complaints from the loved ones of seniors put in her guardianships.

After The Post’s publication, Colin was transferred out of the guardianship division and announced his retirement. All of Savitt’s cases were moved out of Delray Beach. The 15th Judicial Circuit then put in place guardianship reforms aimed at Savitt, such as banning the use of retainers.

The decision Friday rejected the recommendation by Administrative Law Judge Mary Li Creasy, who oversaw a two-day hearing in September. Creasy recommended the effort to revoke Savitt’s registration be dropped, noting the law puts the onus on the courts to suss out conflicts of interest, not the guardian.

The 34-page Elder Affairs final order says her finding flies in the face of the Legislature’s intent to grant authority to the guardianship office to discipline guardians.

They said in court records that the guardian ginned up fees with needless litigation and funneled money to certain relatives of wards. In one, Savitt tried to annul a marriage, in another she tried to tap into a lucrative trust of a stroke victim, court records showed.

Former attorneys of one senior tried to get Savitt removed, telling the court they suspected that $400,000 was missing from the ward’s bank account, but a judge sided with the guardian.

West Palm Beach attorney Thomas Dougherty fought Savitt in court on behalf of Vassallo and the family of another ward. He said the ruling Friday is “hopefully the wake-up call for all involved:” guardians, lawyers and the judges.

“There is no room for self-dealing when it comes to vulnerable people who need the protections guardianships were intended to afford,” Dougherty said.

Judge Martin Colin had a hand in his wife’s guardianship cases, state says

Guardianships: A Broken Trust: Attorney: "Courts Have Allowed This Culture"

I don't mean to take anything away from what was done by Elder Affairs, but this didn't hurt her.