Abuse of elders on the rise

They are physically and emotionally harassed by children eyeing their property. Some are taking help from the police and initiating legal action 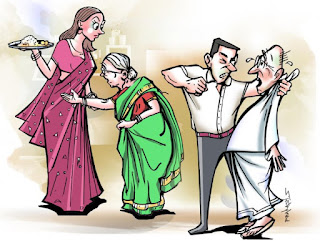 Cases of senior citizens being abused by their children and relatives have spiked by about 25 per cent since last year, according to the police.

The abuse could be physical or emotional in nature, says S Premkumar Raja, co-founder, Nightingales Medical Trust, which has launched the Elders’ Helpline (1090) in collaboration with the Bengaluru police.

“Property-related abuses top the list. The rise in numbers could be because real estate prices are high, and children want their parents to make a gift deed of their property to them. They promise to take care of their parents. But once the formalities are completed, they start ill-treating their parents,” Premkumar says.

As the population increases, more cases related to disputes within families are expected, but a 25 per cent rise is alarming.

“There have been cases where parents are denied food and medicines and access to television. Children sometimes isolate their parents and stop talking to them,” he says.

Senior citizens slip into depression and are forced to complain against their children, he says.

Swathi Bhandary, who works with the Elder’s Helpline, says an increasing number of senior citizens are now aware of the provisions of The Maintenance and Welfare of Parents and Senior Citizens (Amendment) Bill, 2019.

“They are coming out about their abusive children and registering complaints,” explains Swathi.

Parents can cancel the gift deed under the new law if they feel they are not being properly looked after. But cancellation comes with its own complications, Swathi explains.

“The tribunal finds it difficult to cancel the gift deed if children have taken a loan on the property. Loan brings in third party complications and eviction becomes a problem,” she says.

Sandhya G, project in-charge with Elders’ Helpline, says most of those abused are between 60 and 70 years.

“By this time their children are well settled and are looking for financial growth. This is when they seek their parent’s property,” she says.

“We don’t have proof in terms of abusive marks on the body or scars. By the time they come and report the physical torture, the scars have healed and tension and fear has given way to anxiety,” says Sandhya.

What the law says

According to the Maintenance and Welfare of Parents and Senior Citizens (Amendment) Bill, 2019, people intentionally abusing their parents or senior citizens under their care and protection or abandoning them may be sentenced to six months’ imprisonment or slapped with a fine of Rs 10,000 or both. The law provides for the establishment of a tribunal for senior citizens to file for maintenance and assistance. Applications from those above 80 have to be disposed of within 60 days.

Sudha (name changed), 65, is one of four sisters. The elder sister died leaving a three bedroom house to Sudha. Since Sudha was financially sound she made a gift deed to give it away to her two surviving sisters. She also gave money and gold to them. However, after retirement, when she went to stay in one of the rooms in the house, the two sisters subjected her to verbal harassment and physical assaults.

Sudha complained to Elders’ Helpline and filed a case in a tribunal. The sisters did not attend the case initially. They appeared for the final hearing. The tribunal passed an order cancelling the gift deed. Sudha managed to get back a part of her property.

Sixty-seven-year-old Rekha was cheated of Rs 2 lakh by a friend. She was hit and verbally abused by the friend, who had borrowed money from three people. After Rekha approached the helpline, the friend was called. The friend’s son, living abroad, was summoned. He understood that his mother was in trouble and offered to clear debts amounting to Rs 6 lakh. All this was done only after police intervention.

Ramachandrappa , 87, distributed his property equally among his three daughters. While the second daughter took care of him and his crippled wife for 20 years, the first and the third daughters didn’t bother. The father gave the most money to the third daughter, hoping he could move in with her. The daughter turned him away. The police had to intervene and ensure Ramachandrappa was sheltered in his daughters’ places. They also got him an annual maintenance of Rs 7,000.

Full Article & Source:
Abuse of elders on the rise
Posted by NASGA