The Office of the Inspector General for the U.S. Department of Health and Human Services called on the hospital to refund the overpayments in its findings released this week.

The report alleges the hospital did not fully comply with Medicare billing requirements for 54 of the 100 claims it randomly selected for review from 2017 and 2018.

OIG Report on Sunrise Hospital by KSNV News3LV on Scribd 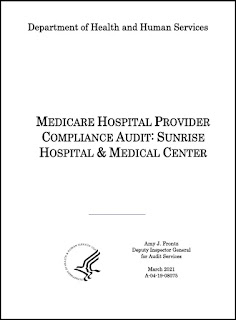 Auditors found nearly $1 million in net overpayments for those 54 claims, and they extrapolated to estimate about $23.6 million in total overpayments, according to the report.

"We strongly disagree with the OIG’s audit findings related to our [inpatient rehabilitation facility] and because we believe the care we provided to our patients was necessary and effective, we will appeal those findings in due course," Todd P. Sklamberg, CEO of Sunrise Hospital, said in a statement. "We think it unfortunate that the OIG audit process did not take into account the overwhelmingly positive outcomes and the feedback of our patients and their families, all of whom benefited from our IRF services."

The inspector general's office said in its report that while Sunrise disagreed with its assessment, the hospital did not provide additional documentation and the original decision would stand.