Biderman’s Chart of Coercion: The template for guardian abuse 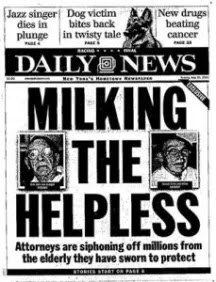 As often happens when I am researching one thing, I stumble across something totally unrelated, but valuable. This happened recently when I stumbled across Biderman’s Chart of Coercion. The chart lists eight progressive steps of torture to break an individual down. What caught my attention was that I was reading the exact method of operation used by professional predatory guardians once they target a victim and take them prisoner. And this is a hostage situation.

Because this is a tribunal setting, set up specifically to avoid the law and any Constitutional protections, the rules of evidence and the code of civil procedure are not required. Basically a probate predators ball!

Vulnerable adults along with those with handicaps and children are seized by the state and declared a “ward” of the state. Essentially this designation redefines the individual as property of the state, no longer recognizable as a living, breathing human being, as legal capacity and legal agency are immediately removed along with the right to use their own name.

As probate is only suppose to come into play upon presentation of the death certificate, the “ward of the state” designation signifies a civil death that the tribunal relies on to proceed, even though it is this same tribunal who declared the living individual a ward.

As a ward, these civil deaths prevent them from accessing state courts which are based in the law, as they no longer are recognized as having any rights whatsoever. After all a probate examiner essentially declared them dead in the law. This designation (ward of the state) is used by the Supreme Court in its refusal to hear any of these cases. Their refusal is based upon the idea that these cases are the property and control of the state.

How to destroy a “ward of the state” with judicial approval

I had noted a long time back that the actions of the predators seemed to follow a distinct pattern in their application. After reviewing the chart below, I now realize that they are using a tried and true method of psychological torture, brainwashing and terror to overtake the victim. The chart lists eight chronological general methods of torture that will psychologically break an individual. It has also been applied to the psychological abuse used by perpetrators of domestic violence. The psychological and physical methods used by abusive guardians are virtually identical to those of the chart. These methods are actually used by our government and military on prisoners of war.  This system deprives the victim of all social support and makes the victim dependent upon the abuser.

Even armed with this little bit of information, do not expect any politician to intervene and actually try to end this. Too much money gets dumped into their campaign funds from BAR Associations, guardianship associations and others who have a vested interest in allowing the system to run unimpeded. Money talks even if it’s money stolen stolen from an estate at the expense of a captive elderly individual.

A so called “guardian” is given title to the person as if they were an object or thing, and to the estate of the individual with little to no oversight. The abuse, neglect and trauma are standard procedure in these cases. And the very first thing the predator does, is to isolate the individual. Virtually every state has statutes prohibiting isolation yet it is the first action taken. The predators make spurious claims as to why isolation should happen, but provide little to no evidence to support their claims.

The effect, especially on the elderly is terror that results from the sudden and terrifying separation from everyone and everything known to them. And politicians and so-called “judges” turn a blind eye and yawn. They pen fluff and buff bills that have no teeth in them and do not address any of the serious human rights violations, violations of due process, or the obvious intent to access assets for personal gain.

While our elected officials concoct one useless bill after another supposedly to address the abuses in the probate system, not one will even say the word isolation much less address it head on. Not one of them will sight as criminal the abuses of probate tribunals and their guardians whose lives are predicated upon a parasitic existence at the expense of the vulnerable. Instead we get one bill after another that creates more agencies, delivers more funding to the very system we fight, and which will produce nothing other than another obstacle to those trying to escape this system of government sanctioned human trafficking.

And where were all your elected officials while this system of human trafficking operates in full view of the public?

Well! They were pretending it was an isolated incident. Not that? Oh! Well they never heard of such a thing. That didn’t work? Ok…how about this one: Let me look into this and I’ll get back to you. (Please don’t sit by the phone and wait for that return call…it isn’t coming.) the excuses elected people come up with are staggering in not only the dishonesty, but also in it’s blatant disregard for human life.

Guardianship never had a noble purpose. It has always been about capturing the vulnerable and taking whatever property or assets they had. It was and is a system populated by otherwise socially unacceptable people from the hearing examiners and guardians and on to the politicians who protect and facilitate this system. This system of human trafficking has always been corrupt and cannot be repaired. There is no “fixing” the probate system. It must be abolished in total. In its place, supported decision making is a viable and worthwhile effort and I am sure we can devise a system that functions far better and equitably than so-called “probate”.

These are just a few of the suggestions I received concerning what needs to occur:

There is much more that needs to be added. Please send along any items you believe should be added to this list of demands to reign in the corrupt probate system.

In the meantime, review Biderman’s list of techniques and compare it to your case. Let us know what you find.

a person’s authority under law to engage in a particular undertaking or maintain a particular status such as the right to be recognized as a specifically named living, breathing man or woman.