Tonight on TS Radio with Marti and Coz: WHERE IS DAVID ITALIANO? 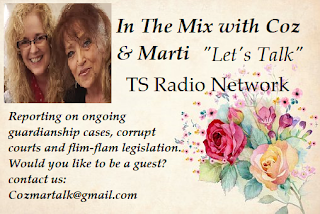 "Tonight on TS Radio (at 7:00 pm EST) we are asking that anyone who may have information on the whereabouts of David Italiano, resident of Pennsylvania, who has been seized in an unnecessary guardianship and disappeared in the system, please contact us. David has been isolated in an undisclosed location for unknown reasons.

PA, like many states, is quick to rush to guardianship vs. less restrictive ways to support a person. We have worked with many groups to find assistance to help David Italiano.

We reached out to the local Ombudsman for help but were told that there was a guardian and there was little that the Ombudsman could do.

We escalated our conversation to Margaret Barajas, the PA State Long Term Care Ombudsman.
We had multiple meetings with her that went nowhere. We met with her supervisor, PA Sec. of Aging, Mr. Robert Torres, to request his office facilitate a meeting with the guardian.

We filed complaints with the PA Office of Civil Rights but with no signed release from David, they would not act.

We had the same response from the Federal Office of Civil Rights,

We have reached out to PA State Rep Jeff Wheeland for help. Like many of the others, he would not get involved due to their being a guardian.

We contacted Senator Robert Casey’s office to request help. Both Senator Casey and his policy person for the Elderly and Disabled population, Michael Gamel-McCormick agree that the guardianship system is badly broken, there was nothing that they could offer in the way of help. Senator Casey is drafting legislation to be introduced to the 118th congress to address systemic changes that are needed to protect people from unnecessary guardianship."

LISTEN TO THE SHOWLIVE or Listen to the archive later!
Posted by NASGA