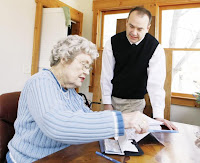 DHS recently investigated the neglect of an elderly Enid widow, who lives alone and is failing fast. A judge named her Enid grandson her guardian, though the woman wanted her son in Oklahoma City.

After her grandson was suspected of embezzling from her, the judge named her Enid granddaughter guardian. But she failed to pick up her grandmother’s medications and take her to doctor appointments, so the judge appointed an Enid bank. Now, the woman’s son regularly drives up from Oklahoma City to chauffer and care for her, and submits bills to the bank for payment.

Such scenarios can be avoided if families plan for long-term care, including appointing someone to handle financial affairs and make medical decisions, said Jerry Shiles, an estate planning attorney with Parman and Easterday in Oklahoma City.

A guardianship case can cost $3,500 to $4,000, plus some $1,700 annually because guardians are required to come back to court every year to submit a plan of care and a detailed financial accounting, Shiles said. "It’s just wasted money,” he said.

Shiles urges families to plan ahead for long-term care, including signing a financial power of attorney and medical power of attorney. The cost for the two legal documents is about $350, Shiles said. "Without them, you’ll spend 10 times that, not to mention heartache,” he said.

Email ThisBlogThis!Share to TwitterShare to FacebookShare to Pinterest
Labels: Oklahoma, Power of Attorney

This is a good article trying to help people avoid guardianship. Thank you, NASGA.

The only thing is that a person can do everything right, and have a judge wipe away that person's wishes and documents with one swipe of his/her pen.

One correction - a guardianship can cost more than $3,500 to $4k. It can, and often does, cost everything - forcing the family of the ward into bankruptcy.

Yes, it's very important to have those advance documents.

But ask the preparing lawyer whether he/she will stand up in court and fight for you when the Big G comes!

Having those documents in place, and if validly executed, would obviate the need for guardianship.