Sentenced to a Mere 30 Days in Jail 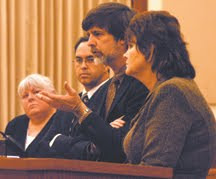 A Macclenny woman believed to be the mastermind of a scheme to bilk her elderly and infirm sister-in-law out of $340,000 in cash and other assets will spend a month in county jail and be on probation for 10 years.

Francis Claudette Gray, 48, who now lives in Lake City along with co-defendant and husband Jimmy, 77, will also be required to repay $227,212 back to the estate of Margarete Gray, who died last fall of cancer in a Jacksonville nursing home.

The Grays were not charged criminally until September, 2008, when assistant state attorney Geoff Fleck filed counts of felony grand theft and exploitation of the elderly. Sheriff’s investigators had completed an investigation two years earlier, and former prosecutor Mel Bessinger was hesitant to file because he feared there was little proof the couple coerced the elder Mrs. Gray to sign over power of attorney.

Prosecutor Fleck contended that’s exactly what they did in a blatant grab for the ailing relative’s assets. The chain of events that immediately followed in the summer of 2006 including systematic looting of Mrs. Gray’s bank accounts, cashing in of certificates of deposit, sale of her north Jacksonville house and the theft of $37,000 cash from inside the house.

A civil lawsuit on behalf of the victim’s estate still pends, and the Jacksonville lawyer who is handling it was in court this week alleging the restitution amount falls short of what the Grays actually took from the victim.

Email ThisBlogThis!Share to TwitterShare to FacebookShare to Pinterest
Labels: Florida, Power of Attorney

This type of crime is running rampid in the "Sunshine State." Thirty days in county jail is adding insult to injury. With the economy as it is this type of crime will unfortunately be seen more often. Watch out for Judges, Professional Guardians, Fiduciaries, the Lawyers and many others. These people are in a position of trust but, not trustable either!! Beware...
My mother has been bounced back and forth between 3 attorneys all charging hefty fees and none looking out for her best interest including the judge with his "rubber stamp" in the state of Florida.

I agree with Lou. Criminal penalties have to be stronger,k with less judicial discretion.

I agree with Lou completely.

This is indicitive to how accustomed we've become to this kind of theft. It's no big deal to those who should think it is. A sentence like this sends the message that crime indeed does pay.