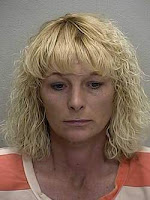 A woman accused of unlawfully obtaining nearly $16,000 from a 91-year-old woman for whom she cared at a local assisted living facility was arrested and charged with exploitation of an elderly/disabled adult, according to Ocala police.

Regina Ann Weitlauf, 43, was taken into custody at her Southeast Ocala home. She was booked into the Marion County Jail and released Monday night after posting a $5,000 bond.

Weitlauf told the Star-Banner that she looked after the woman and would cash checks on her behalf, with the money always going to the woman.

When asked about the $15,698 officials say she did not turn over to the woman, Weitlauf declined to comment other than to say “I’m innocent” and to note that she has an attorney.

We'll see just how innocent she is.

It's a simple matter for the bank to monitor an elders financial accounts "but" it has to be set up.

All employee's at any assisted living facility should always have approval from their superiors "Before," cashing any residents checks. Once approved, then the employee,and their superior or another authorized witness need to count the money out to the resident, then have the resident sign a receipt she received the money.

For family, friend or facility to do it any other way, your asking for trouble.