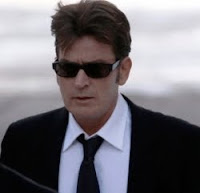 Charlie Sheen's family are considering applying for conservatorship of his estate after his most recent alcohol and cocaine binge landed him in hospital.

Although the 'Two and a Half Men' star has decided to put together a team of professionals to help him overcome his substance abuse problems, his father Martin Sheen and mother Janet Templeton are so worried about his behaviour they may apply for control of his personal affairs and vast estate.

A source told RadarOnline.com: "Charlie looks awful ... he is very, very depressed and feels like the world is going against him. Charlie's parents are discussing getting a conservatorship order.

"Martin and Janet know that it's highly unlikely their petition would be granted, but they are trying to do whatever possible to save Charlie's life."

This is a shame. I hope the Sheen family researches (and finds NASGA) before doing anything drastic.

Another Britney type thing. Yep, it's a shame. Hollywood needs to know about guardianship abuse.

Very sad, and likely it will get even sadder.

Without a doubt, Charlie Sheen's Family Love their son and brother with all their heart but should be very careful about Conservatorship and Guardianship. Be very careful !
Find another way to protect Charlie and his assets. Put an Army of family protectors around him to stop the predators waiting on the sidelines.