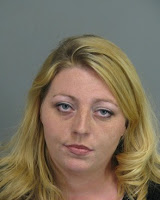 A caregiver is accused of stealing thousands of dollars from an elderly resident.

According to an incident report obtained by News Channel 7, 32-year old Layla Jessica Davidson, of Spartanburg, was arrested and charged with financial transaction card theft, financial credit card fraud greater than $500 and exploitation of a vulnerable adult.

The report states that a man told deputies that his mother's caretaker, Davidson, used his mother's debit card and wrote 13 checks belonging to his mother between May 2 and June 8. The man told authorities that between $6,000 and $7,000 had been taken from his mother.

Davidson was arrested and later released from the Spartanburg County Detention Center on $15,000 bond.

We don't want a police state, but something must be done to better protect the elderly.