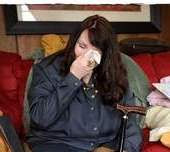 Ginger Franklin was in an Illinois rehabilitation facility nearly 300 miles from her Nashville home when in August 2008 a Davidson probate judge issued an emergency order taking away her rights to control her own life.

The order was issued by Judge David “Randy” Kennedy in response to a petition filed by Franklin’s aunt.

The aunt had been told by doctors that her niece’s injuries from falling down a flight of stairs were so serious she was likely to die or suffer permanent brain injuries, Franklin said.

It wasn’t until early September 2008 when she returned to Nashville, Franklin said, that she learned what had happened in her absence.

As soon as she stepped off the plane after her release from the Illinois facility, she said, she was met by a newly appointed conservator and taken to a group home.

When she asked why she wasn’t being taken to the Nashville condo she owned, “They told me you don’t have a home to go home to,” she said.

Court records show that Franklin lost her home and ended up on the hook for legal fees and other court-approved fees that ate up all but about $2,000 of her assets, including proceeds from the sale of her condo.

Franklin, 55, was released from the court-ordered conservatorship Dec. 2, 2010, when she presented evidence that she was competent and capable of managing her own affairs.

Upset at how her conservatorship was handled, she filed complaints with the Court of the Judiciary, the body tasked with investigating ethical complaints against judges, and with the Board of Professional Responsibility, which supervises ethical conduct of attorneys.

Just last week she received a letter from the Court of the Judiciary informing her that the investigation of her complaint had been completed.

The letter dated April 10 from Court of Judiciary attorney Patrick McHale stated that “appropriate action” had been taken, but it added that details of that action could not be released because of confidentiality provisions in state law.

Judge Kennedy said he also received a letter from the court informing him that the investigation has been closed. “I received no sanctions or disciplinary action, nor was any warranted,” he said. 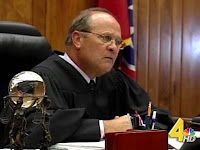 What better way to keep someone from ever going home? Get rid of it!

Judge Kennedy has a suspicious pattern of not following the current laws while making his own laws isn't that twisted? Legislators write the laws and judges follow the laws that are written - isn't that how this goes?

Judges do not write laws.

In my opinions, Judge Kennedy proved he is incapable incompetent on the bench and you can bet the bank account that within those other cases are more examples of an errant judge who needs to be removed from his position now.

BALONEY. Judge Randy Kennedy didn't add any safeguards. He scrambled to find a way to make him look good. He's not fooling anyone!

Baloney is right. The ward Ginger contacts the court the court dismisses disregards the ward now the judge is trying to look judicial what is that about? Probate court is big business nothing to do whatsoever with caring it's aboiut the billing billing billing. Wake up folks!

Brilliant move taking us for fools? Judge Kennedy adds safeguards AFTER he was FORCED to APPEAR judicial and just how much time elapsed from the time he knew (he was outed) until he took any action in his self interest? Goes to show you some people don't have what it takes to have the honor, to have the title 'JUDGE'.

This news outlet is awesome warning people how this system does not work as it should.

You are so strong Ginger. To have survived your accident is enough but you even survived Kennedy's court. You are strong!

Ginger, you really shine in this article and I also think Kennedy's efforts to cover up, didn't!

Stay Strong Ginger Stay Strong Jewel Tinnon All who were harmed by Davidson County conservators Stay Strong and unite to remove the problems all acting 'under color of law'.

Ginger, I am sorry for what happened to you at the hands of a corrupt judge and court system. Stand proud in your strength to have survived the system, and to have been freed from the court's hostageship.

Unfortunately, the Cook County Probate court in Chicago, IL also allows estates to be depleted by attorneys and guaridians in the name of "preserving the rights of the ward."

Kudos for the media for their coverage of this crime.

Preying on people when they are the most vulnerable is the lowest of the low.

ginger's story made me cry too.

God bless to you Ginger. My best wishes are with the people who are suffering like this.

Thank you everyone for your best wishes to Ginger. She has been through hell and back. I have been there for every step. The part I missed out on was when the doctors hastily said she was most likely not going to fully recover, and her aunt made her a ward. And, you were right- Judge Kennedy ignored EVERYTHING and did as he pleased until MONTHS after her case ended. And it only ended after intense pressure and a flurry of papers being filed on Ginger's behalf demanding termination. He didn't put in ANY safeguards until recently(more than a year after Ginger case), when the COJ sent a letter stating they had disciplined him. He stated to the Tennessean reporter that he had NOT been disciplined. He STILL isn't telling the truth and never will!

I like it so much, please try to keep posting.

Let me introduce other material that may be good for our community.