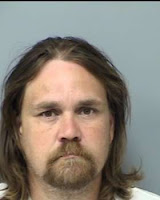 A man charged with exploiting the elderly is suspected in a swath of cases involving older victims who paid for work that was never done.

James David Gruner, 38, was arrested at a St. Johns County motel Wednesday and jailed following an investigation of four complaints of bilking victims in the past three months, according to the St. Johns County Sheriff's Office.

Investigators said Gruner has a history of befriending elderly residents offering to do work for them and once payment is received, the suspect leaves without completing the work.

Gruner has been arrested in other parts of the state for contracting without a license and victimizing the elderly in the past dozen years, according to the Sheriff's Office. Twenty-one cases have been reported in Brevard, Flagler, Putnam, St. Lucie and St. Johns counties.

Good. I'm glad they got him!