A Kissimmee attorney who was disbarred for ripping off an elderly couple is now facing federal charges for a similar scheme Tuesday night.

Channel 9's Jeff Deal spoke with the woman who tipped off authorities about Linda [Vasquez] Littlefield, and asked if there are tougher charges for people who prey on the elderly and take their life's savings. 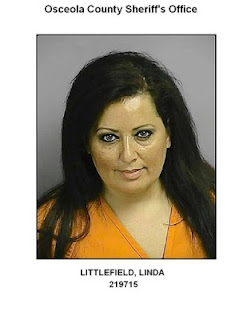 They were both convicted. Linda is still serving part of a two-year sentence. Ross was sentenced to probation.

Federal investigators said there are now 26 victims -- people who put money in a special trust.

They said the Littlefields took nearly $3 million from the trust and spent it on cars, their businesses and property.

Kathleen Foust was Lentz' guardian, and was the first to report the Littlefields.

"Linda and Ross were criminals, they just legitimized themselves and looked like they were wonderful people," Foust said.

Since then she's heard horror stories about how the Littlefields targeted the elderly.

She said one woman spent her life savings setting up a trust for two developmentally-disabled daughters and lost everything.

"She said, 'Now I don't know who is going to take care of my daughters when I'm gone,'" Foust said.

Linda and Ross Littlefield were first arrested in 2010. Linda Littlefield was a Kissimmee attorney, and her husband Ross helped her run businesses that appeared to help the elderly.

Welcome to Florida Law and how they take care of the elderly. The ticket is to stay away from Florida Attorneys, it is very dangerous. The Florida Courts are taking seniors savings in record numbers, just read the dockets! Get the papers to read and explain the dockets to the Public!

Thwy should both go to hell!

Life in a cage then they can go to the lowest level of hell. I know a sociopath when I see one, her eyes are windows to her conscience: 0 cold cruel cunning manipulative intent whatever it takes to get what she wants she will do it. I'm all for aok tree justice fast and economical I'll supply the tree for FREE!

I don't mean to be judgmental, but she looks like a sociopath.

Who looks like a sociopath
the guardian being interviewed who is suppose to have tipped off the authorities about the Littlefeld Attorneys????Is that who you are referring to???Her eyes look evil too

Get them all even the one speaking looks evil ...if she was the guardian why wasn't Ms Lentz money and cc cards protected which is suppose to be her job
Guardians that are not honest are all sociopaths if you think about it

That guardian shouldn't be advertising her business when elders were just ripped off. Wow she's taking advantage of the situation...hopes she not one of them

The guardian looks just as guilty as the lawyers..beware elders in Central Florida

This guardian advertising her business will sadly profit and it will attract other innocent victims...Heart of Florida Guardians is not very popular in central Florida...Kathleen Foust we are all sure is enjoying a wonder Mother's Day with her loving family...does she ever feel sad for dozens of families who have innocent mothers isolated by the guardian? The lawyers stole the money and the guardian stole the life of those we love and lost..isolating someone from their families is so cruel.. locked up in nursing homes left alone to suffer the last days of their lives..how would they feel??watch out guardian since it can one day happen to you.

Florida good morning
This is outrageous to the goings on.I'm sure the guardian Foust must have a heart since she helped out sweet Janet her ward. Please everyone don't think the guardian is the bad one. I know this guardian and she is a wonderful woman who loves and cares so very much for her wards. Lets praise for helping get those lawyers put away since they are so corrupt

You are one of the few in this world that think this guardian is honest. OMG she has taken away so many loved ones from families and lied about them. This guardian befriended my mother and when she got sick more actions and lies. My children had their toys thrown away by her. My mother home was sold under market value. Please wake up somebody and stop Kathy along with her friend and guardian Mary.

I bet Janet Lentz is not aware that her guardian has two sides to her . There's the evil side and the phony nice side. I hope she stops practicing as a guardian soon by retiring from the profits she earned being a guardian. WOW PLEASE DO NOT BE TRICKED BY HEART OF FLORIDA GUARDIANS
MY UNCLE WAS DESTROYED BY THIS WOMAN AND THE ATTORNEYS SHE KNOWS SO VERY WELL

Prosecutors should do a little more research into Linda Vasquez Littlefield, like falsifying her daughters Leanne's birth certificate for a acting gig... collecting welfare in Texas....did you know she has another birth daughter, she doesn't share that information because she is embarrassed of her disibility. She and Ross are lifelong crimals, the corruption runs deep...Seguin, San Antonio and Houston, Texas.

Her daughter LeAnne is a disgusting human...the racist things that she has said are deplorable...be careful what you post online, it comes back to bite you.

Procecutors should research Linda Vasquez Littlefield in Texas, Seguin, San Antonio and Houston.
She and Ross are lifelong criminals. The corruption runs deep, like falsifying her daughter LeAnne's birth certificate for a acting gig. Collecting welfare illegally and having her parents and brother do the same. Ross and his business practices, hiring illegal immigrants and then profiting from charging them to be paid in cash...
She has a daughter she disowned because she is biracial, and little LeAnne is a racist, the stuff she has posted online is deplorable..

I wonder why LeAnn's Porche hasn't been confiscated, if was purchased with stolen funds...as were thier trips to Paris, Cancun and other places...

I read a online bio for Linda Littlefield, it said she moved to Florida after a tragic accident in Texas. What tragic accident? Her brother was murdered by drug/gang members.
I went to high school with Linda, she was a horrible person, I'm not at all surprised by this.

Dear Person who did last post on Linda Littlefield are you the woman talking in the news video? I know who you are since I too live in St Cloud and know you are the one legitimizing yourself to look wonderful. The guilt is killing you so much you keep bad mouthing the Littlefields. Come forward since you steal elders when their spouses die. You will be next!!!

It's a sad day in America when a scumbag like Linda Vasquez Littlefield can prey on helpless victims and get a slap on the wrist. This woman (and I use that term loosely) deserves no mercy. Her victims will probably spend the rest of their lives enduring financial hardships....while she is free to run another scam in five years.

Please STOP the guardian Kathy Foust she is the one GUILTY
The devil and evil will stop you at heavens gates one day soon.
Guardians that are evil do not go to heaven. Poor Janet Lentz has NO idea what this evil woman did to others lives all for the love of money stealing and more.

Why is this guardian always the Petitioner and closing out in 6 to 7 years after the death of the Ward?
Why is this guardian the only guardian chosen by the same attorneys? So many cases must be multi millionaires.
Have you been lied about by DCF or Examining Committee to get your parent into an Emergency Temporary Guardianship. Did you all know that you do not have to answer to anyone court appointed that is an AIP's right.

It's in the FL Statutes Examining Committee does not get paid unless they find AIP incompetent.

How many people have been freed by this guardian and lived to tell about it?

CHECK COURT RECORDS OF ALL GUARDIANS MEDIATE DON'T HIRE A GUARDIAN UNTIL LAWS ARE IN PLACE.

Just to set the record straight, Kathleen Foust was never Janet Lentz's guardian. Janet came to her office because she was worried about Littlefield's handling of her funds. Kathleen investigated the situation and alerted the police of the Littlefield's activities. She never charged Janet a dime to help her and has been her friend, helping her when she needs help without charge. Get your facts right!

She's a snake you blind idiot. Kathy Foust is a con artist.

You probably work for her you lying scum. Foust is a thief and a cow.