Law enforcement officials and advocates for the elderly and vulnerable adults have formed the Kalamazoo County Elder Abuse Prevention Coalition to head off what they see as a growing problem. 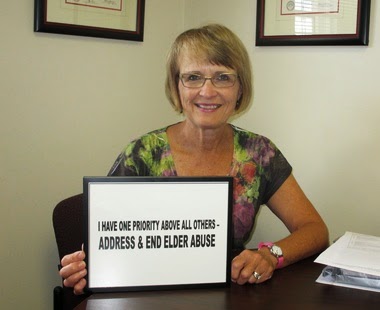 "We definitely are getting more calls that we are referring to Adult Protective Services," said Judy Sivak, director of the county's Area Agency on Aging. "I think that financial exploitation, in particular, is on the rise and is expected to increase with the increase in the (elder) population."

Sivak said she put together the Kalamazoo County Elder Abuse Prevention Coalition in March 2013 to bring together "professionals and senior advocates who realize this is a bigger problem than one individual or agency can solve." Among its members are county Prosecutor Jeff Getting, Sheriff Richard Fuller and Clerk Tim Snow.

Sivak said similar efforts are taking shape around the state.

The coalition in Kalamazoo County has identified several needs, including training of professionals who are required by law to report elder abuse on how to recognize it. The coalition plans to provide training at the end of this year for law enforcement, prosecutors and Adult Protective Services workers on different scenarios of elder abuse.

I do hope they will focus on fiduciary exploitation.

And I hope they spend some time training APS too. APS is too trigger happy to put a guardianship in place and in effect, they do more harm than what incident caused the call to them in the first place.

In Virginia, APS ignores the abuse and neglect that THEY perpetrate by dumping people in dangerous, filthy adult homes.

A thorough criminal investigation is really the only answer at this point. It may need to come from the feds, as happened with a nursing facility in western Virginia.