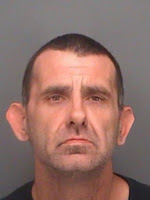 Pinellas Park, Florida --  Police arrested a retail meat salesman Thursday on charges he defrauded an elderly victim of $3,800 in ATM and retail transactions and another $1,200 in stolen checks from two others victims.

Police say Christopher Miller, 41, allegedly used the victim’s Chase and Sam’s Club cards to conduct more than 20 ATM and retail transactions to Gourmet Grocery, where he worked as a salesman selling meats, totaling $3,845 in the city of Pinellas Park. He also defrauded his employer by using a credit card terminal to obtain funds from two other elderly victims -- $751 from one, $528 from another.

This was a not Miller’s first run-in with the law on elder exploitation. His arrest affidavit stated he has exploited others in and around the Pinellas County area.