The Wisdom of the Aged 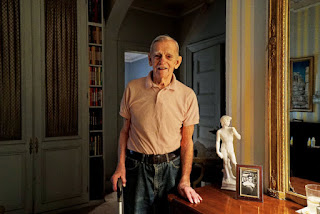 After nearly a year of answering questions, John Sorensen posed one of his own: “Do you know what you want to do when you get old?”

It was a day of frustration for Mr. Sorensen, whose 92nd birthday was the day after Christmas. He was in the kitchen of his Upper West Side apartment, holding pieces of a mop that he could not put back together. Gout had made his fingers almost useless, and his right arm hung limp from a torn rotator cuff. Just combing his hair that morning was a struggle.

“It makes me mad,” he said, speaking about what his life had come to. “I want to go.”

But flip the perspective, and it was another day in a long and rich life. Mr. Sorensen, who had made a career as a decorator, was living independently in his own home, amid the furniture and décor he had carefully chosen himself, and amid memories of the man who had shared his life there. He had music that could still take his breath away, and old movies that never failed to entertain. If his capacities had diminished, they had narrowed to activities that gave him satisfaction. Even in near blindness, he inhabited a mansion of visual memories.

“I’ve had a good life,” he said in the kitchen, retrieving a moment that was more vivid to him than the recent past. “I’ll never forget coming into the living room once and my dad had a canary on his hand. And my mother was looking at him, and I will never forget the smile on her face. It was like a young girl falling in love. I never saw such a smile on my mother. It was only an instant, because as soon as they saw me, it changed. But it was a beautiful memory that’s engraved in my mind.”

Do you know what you want to do when you get old?

Since the start of the year, the photographer Nicole Bengiveno and I have been visiting Mr. Sorensen and five other New Yorkers over the age of 85 — in hospital rooms and at birthday parties, on family vacations and at readings in nightclubs — and through it all, some version of Mr. Sorensen’s question has lingered: What is reasonable to ask of old age? Beyond the assaults of poverty or illness, to what extent can people shape the quality of life in their late years?

In New York City, the population age 85 and up has been growing at five times the rate for the city as a whole, doubling since 1980 to about 150,000. For this often invisible population, the first of its size, what does an older life really look like? And can it be better?

Throughout the year, the six talked unflinchingly about death and loss, but also about love and connection, about accomplishment and meaning. A paradox of old age is that older people have a greater sense of well-being than younger ones — not because they’re unreservedly blissful, but because they accept a mixture of happiness and sadness in their lives, and leverage this mixture when events come their way. They waste less time on anger, stress and worry. As Ping Wong, 90, put it: “When you’re young, the future is so far away, and you don’t know what will happen to you and the world. So when you’re young, you have more worries than the elderly. But I don’t worry now.”

Source:The Wisdom of the Aged
Posted by NASGA

The Times seems to be focusing in on these types of stories and I'm so happy about it.