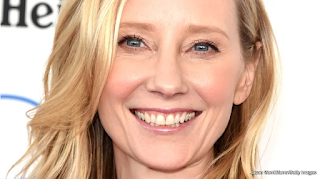 By Cory Parker
Hollywood's still reeling over the tragic death of Anne Heche, and although the actor found a final resting place among her Hollywood peers, it looks as if the legal battle over her estate has only just begun. Heche left behind two sons from two different relationships: Homer Laffoon, 20, whom she shared with Coley Laffoon, and Atlas Tupper, 13, whom she shared with James Tupper. Multiple outlets have reported that the actor didn't have a will at the time of her death, setting the stage for a courtroom quarrel between Homer, who's seeking control of his mother's estate, and James, who alleges that Heche wanted him in charge.

Earlier this month, we exclusively reported on the legal hurdles Homer could face in his bid to take control of his mother's estate. Now, as the battle over boils over, a legal expert is discussing Homer's chance of success in commentary obtained by Nicki Swift.

Anne Heche's eldest son, Homer Laffoon, filed a petition in late August asking to be named legal executor of his mother's estate. However, according to new legal documents obtained by TMZ, James Tupper believes he's the rightful executor of Heche's estate. Not only that, but the "Men in Trees" actor also says Homer "is not suitable" for the role, noting that the 20-year-old is unemployed and was estranged from his mother at the time of her death.

The court has appointed Homer as a special administrator of the estate, but according to legal commentary obtained by Nicki Swift, that could change within a matter of weeks. "The court will hold a hearing to determine if Homer should remain special administrator," said Ryan Sellers, founding partner at Dallas, Texas-based Hales & Sellers PLLC, adding that Homer cannot "do any harm" as he is without the authority to take possession of property belonging to the estate in his role.

"I would still expect the estate to end up with a neutral third party as its principal administrator, unless Homer will agree to James Tupper's appointment in the interest of saving expenses," he added. According to the legal expert, Homer has a slim chance of being appointed to administer the assets of the estate, and if reports that he locked his 13-year-old brother out of an apartment owned by the estate are true, it could be virtually impossible.
Full Article & Source:
Anne Heche's Estate Battle Boils Over With New Accusations
Posted by NASGA