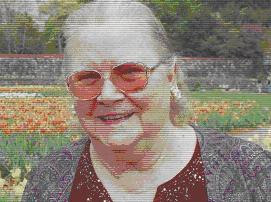 Florida law does not permit appointment of a foreign guardian who is not a family member, yet that’s exactly what North Carolina imposed upon this innocent and defenseless lady. The foreign guardian, appointed without due process by a Superior Court clerk, incarcerated Hazel in a 32-bed facility in Port Charlotte, Florida, without good cause or necessity. The same clerk later refused to hear evidence on her financial abuses. He expressly allowed this stranger to rip Hazel from a loving, stable and stimulating environment with her daughter in Asheville, NC. The relocation was against the advice of Hazel’s court-appointed guardian ad litem, doctors, day care case manager, her sister, her brother, her brother-in-law, another caregiver/friend, and of course, repeated pleas of Hazel’s daughter. Hazel’s daughter even asked to be allowed to care for her mother in Hazel’s own Florida home without any compensation. Her daughter was willing to give up her home and career, so Hazel would not have to go to a facility. Why should Hazel be “warehoused” when she has willing and able family or friends to care for her. The response: “Denied.”

Despite a successful appeal against such order, reversing for “prejudicial error,” the clerk’s office ignored the appeal ruling upon remand, even after the guardian ad litem testified that moving Hazel would be a violation of the guardian’s fiduciary duty, was against the public policies of NC for in-state and non-facility confinement, and was grounds for the guardians’ removal. Hazel’s “institutional confinement” also contravenes the 1999 US Supreme Court case, Olmstead v. L.C., as well as the stated legislative intent in two states and Florida’s statutory prerequisites for facility confinement.

The guardian has total control of Hazel’s estate which was worth $450,000 in January 2006. The guardian testified in December 2006 that Hazel’s assets were worth $300,000-350,000. The clerk made no inquiry about this extraordinary loss of value. The guardian would not let Hazel’s daughter into her mother’s home to retrieve Hazel’s most precious property. So, Hazel’s property (including Florida homestead property with no mortgage) is essentially gone. The guardian hired attorneys in two states to maintain her powers and Hazel’s assets pay them. Hazel does not have a lawyer since the guardian successfully argued to a Florida judge that Hazel is “incompetent” so cannot “hire” one, even if the attorney serves pro bono. Although this guardian consistently acts in conflict of interest with Hazel’s interests, her appointment continues although statute and case law authorizes her “removal.”

The Florida Dept of Children and Family Services (DCF) is aligned with the guardian since the 20th Judicial Circuit Court has “regularly appointed” her for about 18 years. There can be no “elder abuse” if the court authorizes the guardian to act, notwithstanding the lack of meaningful scrutiny. She is under no obligation to maximize Hazel’s resources. This guardian is the president of a corporation (for administering guardianships), even though “appointed” individually, has admitted going to court hundreds of times, and has told Hazel’s daughter that she never loses and the court does whatever she wants.

The same thing happened to me - the judge ignored the order of the appellate court. I still haven't gotten over that. I would have thought the appeallate court wouldn't let that happen, but they do of course.

I am so sorry to hear how Hazel is suffering; how she was taken advantage of by the probate gang.

Clearly, this is an ongoing public mugging of an innocent victim, Hazel with court approval and worse, with encouragement from the Florida Dept of Children and Family Services acting as the director of the mugging.

The financial gain from the guardianship industry is staggering. I would be interested in seeing the residences of the guardians for profit.

"There can be no “elder abuse” if the court authorizes the guardian to act, notwithstanding the lack of meaningful scrutiny."

This is so very true. If the court rubberstamps the crime, it's not a crime.

I am so very sorry for what you are going through. It's very heartbreaking.

Staggering! A caveat to all who assume that justice will prevail in a higher court -

The Guardianship Racket is the biggest SCAM on families today. Elders, chidren and the disabled
are being Legally Kidnapped
stripped of ALL rights and assets by these legal CRIMINALS who hire, via court appointed,
professionals who sell the integrity of their licenses to evaluate/assess
the 'victim' as incompacitated and disparage their family members so these corrupt judges can order no visits or supervised visits removing the only effective advocates the 'victim' will have once the Guardian displaces them to a facility/WAREHOUSE. Then the legalized plundering of the victim's assets including sale of their home, pension plans, social security checks, savings, cars, everything becomes the PROPERTY of the Guardian Racket SCAM

Legislators IGNORE this legalized stealing because State Governments have been infiltrated by Attorneys who are getting kickbacks for their own Lawfirms and legal cronies
and State Governments get
kickbacks from the Federal Government for every 'victim' who becomes a 'ward' of the court/guardian State courts are part of the INjustice System: The Justice System is the Third Branch of government

The Legal Profession is not high on Public Opinion Polls for Integrity neither are Politicians; yet, this is the Profession that has infiltrated all three branches of Government

Vote career politicians out of Public Office and for pete's sake do not vote for any candidate that is an ATTORNEY.

Sure, there are 'good' attorneys out there but they must play the fence or they too will be victimized by the corrupt justice system

I have personally been through the courts of Florida. It took almost 4 years for me to get guardianship of my father. The guardian, her attorney, court appointed attorney, nursing home, doctors, nurses,all cronies. Treated me like crap, told lies, lies and lies. Never once presented any evidence against me. Luckily my father had a trust in another state that the cronies could not access. But, as soon as all assests were gone. They quit fighting to keep him "under their wing". I would be interested finding out which counties and judges some of these abuses occur.