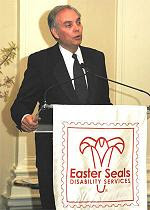 Stanley Schlein remains a lawyer in good standing, negotiating with governors and senators.

Schlein sat down at the elegant University Club in midtown across from Governor David Paterson and Senate Democratic leader Malcolm Smith. Schlein was there representing the three renegade Democratic senators.

A Democratic legislator: "Schlein is a very skillful negotiator."

Another happy client is the New York Yankees, who keep Schlein on retainer as lobbyist, lawyer, and all-around fixer for issues dealing with city government. Public records show that Schlein has collected some $150,000 from the team over the past two years in legal and lobbying fees.

When the Voice asked for permission to use a photograph of Schlein from a recent charitable dinner for Easter Seals, the group's vice president called to praise him.

John McGrath: "This is the guy who makes Christmas happen. He brings the kids toys from the Yankees, raises tons of money. This is an amazing human being."

But in fact, a Voice investigation found that in a dozen cases, Schlein had repeatedly ignored the desperate pleas of family members and loved ones.

There was the construction worker, brain-damaged from an accident, whose family could never get hold of Schlein when they needed him so that they could spend money from a lawsuit settlement to buy a wheelchair and clothes. Schlein somehow let a condo the victim owned go into foreclosure and be sold at auction. At the same time, he steered legal work from the estate to his friends in the Democratic Party.

There was the elderly incapacitated woman whose taxes Schlein never got around to filing and whose valuable stock certificates were allowed to expire. And there was Mary Johnson, 87, retired Irish domestic servant and devoted Catholic, whose life savings Schlein put in an account earning 1 percent at a bank where he was a major stockholder and which he also represented. Johnson was in a nursing home on Gun Hill Road, just minutes from Schlein's home on City Island, but nurses never saw the lawyer at Mary's side. Her family's one request—that money be set aside so that her last surviving friend, another elderly retired domestic, could use a car service to visit her—went ignored as well.


While rooting the Yankees to a new home, Democratic political fixer Stanley Schlein failed his other clients

A few weeks before he guided the Yankees to their victory at City Hall, some of those complaints, many of them years old, finally caught up with Schlein. They came in the form of a brief letter from Ann T. Pfau, one of the state's top administrative judges. The February 22 letter informed Schlein that he was being removed from the list of those qualified to serve as court-appointed fiduciaries those named by the court to handle large sums of other people's money and oversee their property.

Judges, elevated to the bench with the party's approval, routinely name attorneys with clubhouse ties to serve as guardians, receivers, or referees. Many of the appointments are on behalf of the elderly or the infirm, those who have become incapacitated for one reason or another and are deemed no longer capable of managing their own affairs. The positions are highly prized because they usually offer a light workload and a virtually guaranteed payday that can range from a few hundred dollars to many thousands for each case.

As befitting his years of service to the Bronx Democrats, Schlein has long been a key recipient of appointments from judges who come out of the borough's political machine. Since 2000 he has received some $125,000 in fees. But that gravy train came to an abrupt halt with Pfau's letter. While offering no specifics, the judge cited his mishandling of property in two cases, that of a Bronx construction worker named Vincent Robinson, who lapsed into a coma after a construction accident, and an elderly Manhattan woman named Sylvia Friedland, who was institutionalized due to dementia.

Pfau wrote: "Accordingly, you will be removed from the list of qualified applicants by the Court as of the date of this letter."

Well HOORAY! Someone out there is finally recognizing that there really is abuse of guardianships. Keep the ball rolling to remove these predators from the feeding trough!

What an example of criminal behavior, yet those in power turn away from someone who they want on their side to further their personal careers and enrichment.

This is one example of how many? The answer needs to be pursued and explored, state by state and county by county.

Step #1...identify and show us the abusers in full photo.

I will be watching this case with my eyes wide open hoping the unforgiveable, shameful and disgraceful actions by attorney Stanley Schlein makes the front pages of every newspaper in every state in the USA and beyond.

See what happens when the worst of the bad guys are well connected?

Cover-up + conspiracy + corruption = in your face PUBLIC CORRUPTION which must be investigated by our FEDERAL GOVERNMENT, ATTORNEY GENERAL's Office and the FBI.

This is great, keep the spotlight on him and show him for what he is.

Why would the Easter Seals Disability Services use this guy that obviously neglected his disabled and infirm Wards?
They should be ashamed.

This is another example of State government corruption and how much damage the State's Justice System can do to peoples lives for profiteering of the connected.

Citizens have to take a Stand. Write your Legislators and DEMAND they take the loopholes out of the laws THEY make that allows profiteering off of its citizens.
They need to implement laws for TRANSPARENCY and checks and balances in State Civil Courts that allows these courts to turn themselves into KANGAROO courts for profit and abuse of vulnerable citizens like the ederly because one day WE will all be victimized