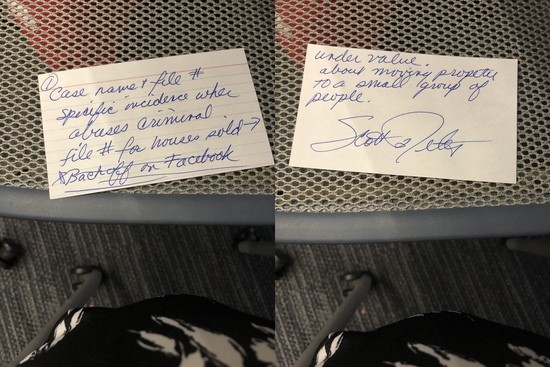 Attribution: Provided by Chris Abood
This note, written by an elder rights activist and signed by Division Chief Scott Teter, is the latest issue of contention between Teter, journalist Gretchen Rachel Hammond, and some members of the community of people trying to reform guardianship practices in Michigan. Teter denies telling activist Chris Abood to tell Hammond to "back off on Facebook."


While elderly Michiganders and their families struggle with a probate guardianship system that many allege is rife with abuse, a journalist who has been investigating Oakland County’s probate courts claims that members of Attorney General Dana Nessel’s staff have interfered with her work.

According to reporter Gretchen Rachel Hammond, Nessel’s communications director Kelly Rossman-McKinney called Hammond’s former editor to have her barred from a March press conference--and, more recently, an elder rights’ activist forwarded a note signed by Teter to Hammond. Among other things, the note includes the crossed-off line: “Back off on Facebook.”

Hammond also told me that, in her opinion, neither the attorney general nor the new task force have shown a commitment to investigating and holding probate judges or professional guardians accountable for ignoring existing laws designed to protect vulnerable adults from having their rights taken away from them.

For their part, both Scott Teter, a division chief in the AG’s office and the person coordinating the new task force, and Rossman-McKinney deny taking any action to interfere with Hammond’s work or discourage her from exercising her First Amendment rights.

Teter further said that, by refusing to provide his office with details about 30 seniors whom she alleges are being held in unlicensed nursing facilities, Hammond is actually endangering the people she’s trying to help.

The most recent incident in the conflict between Hammond and Teter specifically was sparked by a handwritten note, signed by Teter, which was originally written down by elder rights activist Chris Abood during an event earlier this month at Madonna University in Livonia.

Abood, who told me that her mother died after being placed under a guardian by Oakland County Probate Judge Linda Hallmark, first met Teter during a March 12 meeting between Teter, reporter Hammond and her team of investigators, and other self-reported victims of guardianship abuse along with other members of the attorney general’s staff.

According to a March 14 email from Hammond to Teter, during that meeting Hammond and her team showed Teter samples of redacted documents from their nine-month review of “nearly 3,000 court dockets belonging to former Public Administrator Jon B. Munger and Public Administrators Thomas Brennan Fraser, John Yun and Jennifer Carney,” in cases presided over by Oakland County probate judges including Linda Hallmark.

According to Hammond’s email, during their March 12 meeting her team presented Teter and his team with evidence indicating a pattern of Oakland County probate courts and professional guardians ignoring the law and victimizing senior citizens and their families alike. Hammond said her team found a pattern of guardianships being appointed without medical evidence being presented; wards and would-be wards being discouraged from attending hearings about their cases; judges ignoring family members’ existing durable powers of attorney and granting guardianship instead to for-profit, private guardians; and wards being placed in unlicensed nursing care facilities, including “two homes in which either the kitchen or refrigerator had been padlocked shut.”

Hammond’s March 14 email was in response a March 12 email from Teter in which he requested specific information about the sale of a home Hammond alleged was sold at more than $100,000 below market value. In addition, Teter wrote, “we are looking for the most egregious case that involved either the guardian ad litum ignoring the ward (who isn’t incapacitated) or one of the Cases that had the [durable power of attorney] that was ignored” in order to investigate and take action.

Teter’s March 12 email doesn’t mention Hammond’s evidence of seniors being kept in unlicensed facilities or ask for help investigating those allegations. (During a June 24 interview with me, Teter said that he had asked Hammond for details about the unlicensed facilities during their meeting, and that to date he has “... exhausted probably 40 man hours of staff time trying to find people that were ... placed in non-licensed foster homes.”)

Unlicensed nursing facilities aren’t mentioned in the note that Abood said she took down while talking to Teter.

“I spoke with him and I said... What do you want me to say to Gretchen?,” Abood remembered. “He said, ‘Okay, what I need from her is a case, a file number and a name.’” The note, as taken down by Abood according to what she said was Teter’s instruction, asks for a case name and file number, “specific incidence when abuses criminal,” the file number for houses sold under value, and “... moving property to a small group of people.”

The note also contains the sentence, “Back off on Facebook,” which both Abood and Teter agree that Teter crossed out when he took the note from her to sign it. “He said to tell her to back off on Facebook. And I'm thinking, what's he doing looking at her Facebook? And then, when he got the card to sign it, he crossed it off even though he said it. And he said, ‘Well, I don't want it to come from me. Let it come from you.’”

The disputed note isn’t the first time that Hammond alleges that a member of the attorney general’s staff has attempted to or actually interfered with her work. Hammond also claims that, prior to the March 25 press conference announcing the new Elder Abuse Task Force, Kelly Rossman-McKinney from the attorney general’s office called Hammond’s then-editor at The Detroit Free Press to bar her from the press conference.

Rossman-McKinney denied the allegation in a June 24 email. The editor, Mark Rochester, declined to comment on the matter in a June 25 email.

Hammond also said that, contrary to Teter’s claim that she hasn’t attempted to alert authorities about the plight of senior citizens being kept in unlicensed facilities, she had in fact reached out to Detective Sgt. Sunshine Ponzetti of the Michigan State Police.

According to Hammond, “The last conversation I had with Ponzetti was around March 19, when I offered to send her a flash drive with all the evidence I had if she provided me with an address to which to send it. She said she would consult with her colleagues and let me know,” but never followed up. Michigan State Police spokesperson Lt. Mike Shaw told me that “we are unable to comment on ongoing investigations,” including whether or not an investigation is taking place.

Hammond said that her nine-month investigation into guardianship abuse at Oakland County’s probate courts will be published soon. In the meantime, Attorney General Nessel admitted in a recent interview with WXYZ that the guardianship system needs to be reformed, but failed to say whether or not either probate judges or professional guardians will face investigation. While talking with me on June 24, Teter said he is “absolutely” committed to investigating past behaviors and pursuing any appropriate disciplinary measures allowed by law.

For her part, Hammond isn’t reassured. “Everything I’ve seen in the past 12 months is that the majority of these crimes have been committed by probate attorneys and endorsed by probate judges,” she said. “I’m glad to see (AG Nessel) saying something that’s never been said before in terms of guardianship being reformed, but I don’t see any evidence that she’s putting consequences to people who have perpetrated abuses in the past.”

To report elder abuse, including issues with professional guardians or local probate judges, contact the Attorney General’s office at: 800-242-2873. Click here to learn more about the Elder Abuse Task Force, including locations, dates, and times for Attorney General Nessel’s Listening Tour to hear from senior citizens, family members, and the wider community.