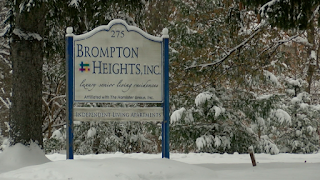 AMHERST, N.Y. (WKBW) — Four employees at Brompton Heights assisted living facility have been arrested and charged with abandoning the care of a vulnerable elderly resident. They face up to four years in prison.

New York Attorney General Letitia James announced the arrests of personal care assistants George Stokes, LaQuanda Johnson and Caprice Newbern, as well as medical technician Stephanie Shinault on Monday. The arrests stem from a December 2017 incident where an 87-year-old woman wandered out of the Amherst facility and was found three hours later outdoors in freezing temperatures. The woman, who deals with dementia, was found wearing only a nightgown. The woman's granddaughter told 7 Eyewitness News that the woman was suffering from frostbite, and had a body temperature of 83 degrees.

The 7 Eyewitness News I-Team had uncovered a history of violations at Brompton Heights.

The attorney general's office alleges George Stokes, a personal care assistant, slept four-and-a-half hours during the overnight shift that started December 8 and ended December 9. By doing so, the residential hall he was assigned to monitor was left unattended, and the woman wandered out through an emergency exit.

Medical technician Stephanie Shinault, and two other personal care assistants, LaQuanda Johnson and Caprice Newbern, have also been arraigned. The attorney general's office alleges the trio was at a nurse’s station that monitored the wing of the assisted living facility on which the resident lived. The three allegedly muted or ignored the alarms that were set off when the resident wandered through the exit doors. They then allegedly took their breaks at the same time and departed from the facility together, while knowing that Stokes was asleep and not doing his duties. When they left the facility, the entire wing was left unmonitored by employees and staff, the attorney general's office claims.

In a statement, the NYS Department of Health said “The safety and wellbeing of assisted living residents is of paramount importance to the Department of Health. In Dec. 2017, we immediately began an investigation of this incident, which resulted in Brompton Heights being cited for multiple deficiencies. The Department will continue to hold providers accountable for their actions.”

The four defendants were each charged in the Town of Amherst Court with felony Endangering the Welfare of a Vulnerable Elderly Person in the Second Degree and misdemeanor Endangering the Welfare of an Incompetent Person in the Second Degree. The defendants face up to one to four years in prison if convicted of the felony charge.