These commonly prescribed medications may increase your risk of dementia, study finds 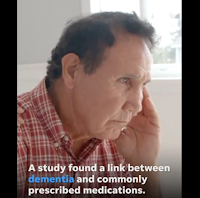 A study out of the University of Nottingham in the United Kingdom found there is a link between dementia and certain classes of anticholinergic drugs.

Anticholinergic drugs help contract and relax muscles, according to Mayo Clinic. They can also be used to treat ulcers and prevent nausea. This is done by blocking a neurotransmitter in the brain, acetylcholine, from entering the nervous system.

The risk is only associated with 1,095 daily doses within a 10-year period, which is equivalent to an older adult taking a strong anticholinergic medication daily for at least three years.

"The study is important because it strengthens a growing body of evidence showing that strong anticholinergic drugs have long term associations with dementia risk," said study author Carol Coupland, professor of medical statistics in primary care at the University of Nottingham.

"It also highlights which types of anticholinergic drugs have the strongest associations. This is important information for physicians to know when considering whether to prescribe these drugs," she told CNN. "This is an observational study so no firm conclusions can be drawn about whether these anticholinergic drugs cause dementia."

The study warns people against stopping any of the medications listed without consulting their doctors.

The researchers found no significant increases in dementia risk associated with antihistamines, skeletal muscle relaxants, gastrointestinal antispasmodics, antiarrhythmics, or antimuscarinic bronchodilators, but associations were found among other classes of anticholinergic drugs.

An estimated 47 million people worldwide were living with dementia in 2015, while in the United States around 5.7 million people have Alzheimer dementia, according to the study.

Anticholergenic drugs include, but are not limited to, Artane, Bentyl, Oxytrol, Neosol, Symax and Vesicare. A full list can be found at Mayo Clinic.