Are You a Victim of These Frauds Targeting Seniors? 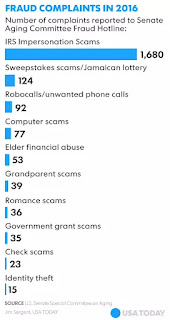 An IRS impersonation fraud that has victimized thousands of Americans leads a 2017 U.S. Senate ranking of the Top 10 scams targeting senior citizens.

Dubbed by the Treasury Inspector General for Tax Administration as the most pervasive impersonation fraud in IRS history, the swindle involves suspected scammers based in the U.S. and India who telephone Americans and threaten arrests unless purported tax debts aren't paid immediately. At least 1.97 million people have been targeted, with as many as 200 victimized per week during the scam's peak last year, according to the inspector general.

Separately, 1,680 people contacted a toll-free hotline established by the Senate Special Committee on Aging (1-855-303-9470) and reported they were contacted or fleeced by the scam in 2016. The total — more than twice as many as any other complaint — ranked the fraud first in the panel's annual report, ahead of sweepstakes scams, robocalls, elder financial abuse and grandparent scams, the committee reported at a Wednesday hearing.

IRS scam suspects conned victims in at least 21 states
Testifying by video at a committee hearing Wednesday, 81-year-old Phillip Hatch of Portland, Me. said he lost $8,000 to IRS impersonation scammers who threatened "the marshals will be in your house within an hour" unless he paid what they claimed were overdue taxes.

"I was mad — upset that I was taken in," said Hatch. "Just give me five minutes in a room alone with those people and I'd be happy."

Full Article and Source:
Are You a Victim of These Scams Targeting Seniors?
Posted by NASGA

I've been targeted by the IRS scam a year or so ago, and I call them to report and they were rude to me.