Missouri: Wife of Retired Couple Forbidden to See Her Husband in Nursing Home After Publication of MedicalKidnap.com 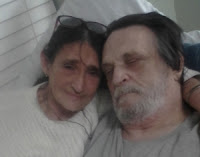 Shortly after our article was published, the day before Valentine’s Day, Helen was told that she is no longer permitted to visit her husband in the nursing home, which is located in Callaway County, Missouri. Helen is devastated. She told us: "He is the love of my life. We just want to be together."

During Helen’s visit with Charley Monday at the nursing home, she said 2 nursing home employees told her that the administrator wanted to meet with her in her office. In that meeting, Helen was told that she was not allowed on the premises anymore. Further, if she returned, they would call the sheriff’s department, and she would be arrested, according to Helen.

She was handed a letter signed by Conservator Amanda Huffman stating that Helen was interfering with Charley’s care and that the nursing home was to stop all visits from her with her husband.

Even Charley’s friends are reportedly being turned away from visiting him since Huffman’s order. Later in the day on Monday, a friend of the Taylors came to visit him. She was escorted off the property by three female staff members. She was told: No one can come to see Charles Taylor without calling Amanda Huffman, and she has to approve it.

Helen said that visitors cannot call Huffman ahead of time, and that someone from the nursing home has to make the call while the visitor is present. Helen said that Amanda Huffman “doesn’t answer her phone.”

Charley Speaks with Health Impact News
In fact, Charley has made it clear that he wants nothing more than to go home with his wife.

One of our reporters spoke with Charley recently regarding the Health Impact News article and he verified that the article was true. The reporter found Charley to be very articulate and coherent.

When asked about allegations emailed to us that Helen had tried to hurt him, he was indignant: "That’s nuts. My wife and I love each other very much!"

Helen is very much afraid for her husband’s safety. She has described numerous occasions when his care has been neglected, and she has made sure that staff took care of him properly. Without her checking in on him, she fears that he will not fare well. 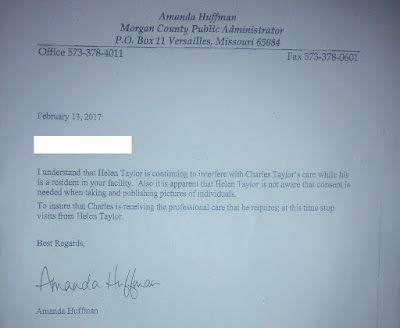 Full Article and Source:
Wife of Retired Couple Forbidden to See Her Husband in Nursing Home After Publication of MedicalKidnap.com Article

This is elder abuse and the guardian should be removed.

I agree Brian. Surely this is criminal.

THIS IS NOT LEGAL!!! No facility can isolate a resident from loved ones,it says so on the board of health and licensing posting they ate required to have in full view, it is also against Medicare laws. THIS FACILITY is cowtowing to a lawyer BC they are afraid, you need to get the state agencies involved and let the facility administration know that they are in violation of their licensing by isolating this resident from his loved ones.

unfortunately the guardian can do whatever they want it's really sick.

Oh they take guardianship over elderly that aren't being abused. There were 7 of us taking care of my Aunt. She wasn't allowed to be by herself. She had brain tumors which caused her to have some dementia.  She walked, talked, went to the bathroom. We pretty much made sure she had food, drinks, and watched that she was safe. We had taken her out of a nursing home that was abusive. When she left there they had her so drugged up she didn't even recognize you or do anything herself. She sat in a chair and soiled herself because they never came in enough time to take her to the restroom. When we got her she gained her strength and was lucid most of the time. We had a nurse come in to check on her. We had physical therapy check on her. Well a couple of times she remembered her rape that happened years ago when she was a teenager. So she told the nurse she was scared. Well it went as far as they called adult protective services. They visited twice and removed her from our home. She had everything she needed and a family that cared and loved her. Well 4 weeks later we attended a guardianship hearing she didn't know us anymore the new nursing home had her so drugged up again. They won the hearing based on lies that they created. They even tried to say my mom was abusing her money. Well we proved them wrong because for the seven months we had her we didn't even recieve her social security or her disability. My mom had just w weeks before they took her got the money to start coming. The only money she had was her pension. Well they got guardianship, took over everything of hers and started liquidating her assets. Put her house up for sale, took money from her revolving acount, switched banks. Three weeks later she passed away. They has my Aunt 6 weeks and basically killed her. So much for protecting her. We are in the process of getting executor of her estate. We found out they were reducing her seisures medicine which she had to have to live. They missed her appointment with her neurologist.  So now we have a huge mess on our hands. All thanks to people who were protecting her.

I feel so terrible for the wife that she cannot see her husband. Where is the PROOF that she caused him any harm? This is absolutely abusive!!
How can innocent people have their rights taken away for no reason? Is this the United States of America? We have to stand up to this abuse of innocent people. Unfortunately, I know the nightmare myself. I will pray for these people to be brought to justice!