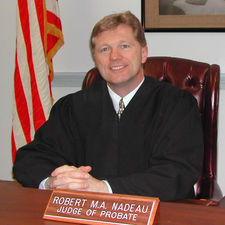 The Committee on Judicial Responsibility and Disability recommended the sanctions, the harshest the Maine Supreme Judicial Court could hand down short of disbarment, for what it says are five violations of the Code of Judicial Conduct.

Cabanne Howard, executive secretary and counsel to the committee that investigates and recommends sanctions for Maine judges, outlined the five violations to start the hearing.

Nadeau faces the proposed sanctions for actions he took in November 2012, when he directed probate court staff not to appoint certain attorneys to litigants who qualified for indigent legal service, for ordering a lawyer to destroy an email deemed a public document, and for ordering the removal of a lawyer from three cases to which she had been assigned.

The committee also found that in April 2015, Nadeau changed the entire probate court schedule without consulting staff just hours after the commissioners turned down his request for more court days and a raise. During subsequent probate court hearings, he also told litigants who complained about scheduling to contact the County Commissioners to urge them to increase funding for the court.

“The motive was retaliatory to the County Committee for denying his raise,” Howard said. “This was all the cases pending in his court. Everybody got hurt in these delays.”

Nadeau, 62, who lost his bid for re-election in a three-way race last year, has been sanctioned twice previously for violating the code of conduct for judges.

He first was suspended from the bench in 2007 for a week without pay for lying about his opponent in his 2004 re-election bid. He was suspended for 30 days without pay last year for statements he made in a 2013 letter to the attorney representing his former girlfriend in a protection from harassment matter.

This guy sounds like he should have had a yearly psychiatric evaluation.

Looks like this judge got caught and I fear there are so many more who should be caught.

Sanctions are a beginning. He should lose his pension if he has been there long enough to get it.