The Jackson family matriarch, 86, asked for a restraining order Wednesday claiming the relative who has acted as her driver for years manipulated and intimidated her into submission and accessed her bank accounts without permission.

The court granted a temporary stay-away order, prohibiting Trent from entering her gated community in Calabasas, using her credit cards or coming within 100 yards of her, according to paperwork obtained by the Daily News.

“She has had enough, her health is fragile and she is tired of being frightened,” the paperwork filed by her lawyer said.

The paperwork states that the nephew, 52, has put a stranglehold on her connection to the outside world.

“Trent was supposed to be her driver, but over time (he) has infiltrated Mrs. Jackson’s business and personal affairs, even referring to himself as her ‘house manager,’” the filing states.

“Trent has made it his business to regulate Mrs. Jackson’s interactions with her children — screening phone calls, not relaying messages, now allowing privacy during visits or phone calls,” it claims. 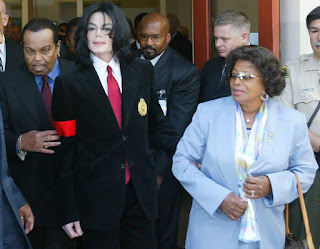 “Because he managed to get a key to her bedroom, he opens her door at his will with no regard to her privacy,” it states. “Mrs. Jackson has to hide in her closet to speak to her kids so she can speak freely.”

One time, he pulled the car over while they were on a drive and yelled at her to reveal what she had discussed with a close family friend, the paperwork alleges.

The filing also accuses Trent of tricking the King of Pop’s mom into taking a trip to Indiana that she thought would be brief. He kept her there for more than a month, the paperwork claims.

Mrs. Jackson took a trip to London so that her team could fire Trent and remove him from her guesthouse while she was out of town, it states.

“Mrs. Jackson wants to return home from London but is afraid to go home with Trent there,” the filing states. “She fears he could physically harm her for terminating him.”

A hearing has been set for March 1.