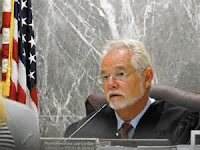 A Broward County circuit-court judge, who admitted “undignified conduct” while sitting on the bench, has been publicly reprimanded by the Florida Supreme Court.

According to a report CBS Miami of the hearing, Judge John Patrick Contini stood silently as the court assailed him over a series of emails from 2015 that he sent to a public defender suggesting what forms and methods he should take in seeking more-lenient sentences for some clients.

The judge didn’t make prosecutors aware of his actions until a week later, prompting them to eventually seek to have him disqualified from pending litigations.

What is a reprimand? Removed from current cases and time off with pay?