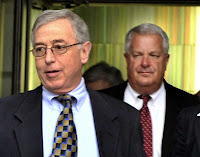 A federal grand jury in Harrisburg returned a 48-count indictment against former Luzerne County judges Michael Conahan and Mark Ciavarella Jr., who are accused of taking millions of dollars in kickbacks related to the construction of two youth detention facilities.

Conahan and Ciavarella had pleaded guilty in February to honest services fraud and tax evasion in a deal with prosecutors that called for a sentence of 87 months in prison, far below federal guidelines.

But the deal was rejected last month by Senior US District Judge Edward M. Kosik, who said the two hadn’t fully accepted responsibility for the crimes, and the former judges switched their pleas to not guilty.

Yesterday’s indictment marked a dramatic escalation in the government’s pursuit of the disgraced judges. The charges include racketeering, fraud, money laundering, extortion, bribery, and federal tax violations and could bring decades in prison. The indictment also seeks the forfeiture of at least $2.8 million, “which is alleged to be the proceeds of the charged criminal activity,’’ according to a news release issued by the US attorney’s office in Harrisburg.

When Judges Stain Our Kids

I am so glad to see Conahan and Ciavarella getting what they deserve!

These two give judges a bad name!

Is anybody looking at the guardianships Mark Ciavarella and Michael Conahan presided over?

I was pleased to see the deal rejected and to see these two lumps of coal have to stand trial and accept their punishment--- which I hope will be very severe!

Conahan and Ciavarella may just be the tip of the iceberg. Luzerne County needs to be disinfected of the stench of corruption!

I hope the feds are looking into EVERY case that touched these two crooks.

I love the growing list of charges against these two.

Decades in prison is what they deserve.

How many young lives did they destroy while taking their kickbacks?

How many elderly lives were lost in the same way?

Someone will make a movie of the Conahan/Ciavarella/Lokuta stories for sure.

This whole mess reminds me of "The Insider"

these 2 judges don't look the part of crooks at first glance do they?

and I bet when they were wearing their flowing judicial robes sitting at their courtroom benches they looked very judicial and honest, goes to show you how easy it is to fool people and for how long did this shceming go on?

Judge Conahan was the last lower court judge to touch_ to slam my mother's life(case). He does the same and worse to elders as to youth. Predators go for the vulnerable. I am not the only one with an immediate family elder done in by his court approval. I have documents to prove it and so does another victim that I know personally. Conahan has a criminal mind. I haven't dealt with Ciavarella personally; he was not in probate court. The elders ended up starved & dehydrated to death as the end to their 3rd party court appointed guardianships after all was taken from their estates. The perfect crime was topped off by the mayor selling both of their separate Luzerne Co. properties. It was one of many COURT APPROVED CRIMES. The charges against Conahan do NOT INCLUDE those related to his probate rulings. So Mr. Conahan_ any challenges to my statements? How about a libel suit; I'm inviting you ! Still enjoying your 'above the law' arrogance?

"Follow the money!" These judges are given LEGAL right to take advantage of adults as well. Through their guardianship programs, all it takes is one person to complain. Then, if the elder person has MONEY, they set themselves up, including their friends, for a cash flow to continue.

I hope these two criminals who now cast a dark shadow on their profession feel some shame for what their actions by casting doubt and dishonoring the honorable judges.