Still Fighting for Her Husband

A Horseheads woman continued her battle Thursday for guardianship of her husband, who has been in a persistent vegetative state since an accident nearly four years ago.

Sara Harvey said she is fighting for legal guardianship of Gary Harvey -- who suffered a severe brain injury in a January 2006 accident -- so he can get better medical care.

She said her husband is suffering under significantly inadequate care provided by the Chemung County Nursing Facility.

"I see stuff go on with him, and I get no answers," she told state Supreme Court Judge Judith O'Shea during oral arguments made Thursday by Assistant County Attorney Donald Thomson and Ithaca lawyer William Shaw, who represents Sara Harvey.

Shaw said there had been stonewalling by the county in releasing the medical records that are crucial to his case. Those documents either sustain or refute accusations against Sara Harvey, and he cannot proceed without them, he said.

Thomson said the county opposed the release of Gary Harvey's medical records because Sara Harvey has no legal right to them.

O'Shea asked about Sara Harvey's plans for her husband. 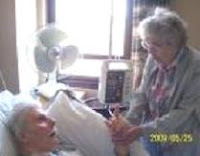 See also:
The Brainwashing of an Unsuspecting People: Continuing to Deny Death Panels

Follow Up: The Gary Harvey Story
Posted by NASGA

Gary Harvey, to my knowledge, has not been diagnosed with being in a persistent vegetative state.

The picture of Mr. Harvey with this posting shows Mr. Harvey reacting; people in persistent vegetative states aren't able to do that as they are mostly comatose and unaware of their surroundings.

I believe "persistent vegatiative state" is a product of the County who is trying to paint the picture that Mr. Harvey isn't aware of the care he's getting or not getting.

Of course, we could ask Sara Harvey but she wouldn't know either since the County won't give her Mr. Harvey's medical records.

What's the county afraid of? What's in those medical records that they're trying to hide?

This case illustrates one of the devestations of guardianship and litigation.

Gary Harvey should be home. Every day he remains under the control of the county is another day he is in danger.

Anyone can see something needs to be done. But is it? No --- instead of just sending Gary Harvey home, there has to be a court battle. Litigation after litigation.

The idea is "deny, deny until they die".

Let's hope Gary Harvey can hang on until his wife wins his freedom.

Sara Harvey has the fight and determination of a lion!

We pray for your success, Sara!

Nursing facilities get by with substandard care.

If Gary Harvey were at home and his wife provided him the same care as CCNF, she'd be charged with real abuse!

But, CCNF gets by with it because nursing homes have lowered the bar and legislators let them get by with it.

I feel for Sara Harvey. The county has effectively made her a widow.

Shame on every one of them.

Stonewalling is the name of the game, unfortunatley.

The county is counting on Gary Harvey dying before they have to produce those records.

The judge shouldn't let them get by with this.

If Gary Harvey were cared for at home, he wouldn't be exposed to all the extra germs at nursing facilities and hospitals.

His care would be less expensive because he'd be avoiding many needless illnesses.

Thomson should be ashamed.

It's a crying shame that Sara Harvey has to spend her life savings protecting her husband.

Chemung County should be forced to reimburse her.

Denying the wife the medical records is nothing less than cruel treatment of her. I am sure the anguish and the worry she feels every night can't be measured.

I pray the judge will do what's right for Gary Harvey and send him home.

Of course, Sarah Harvey should be responsible for her husband's care.

Well Mike my maiden used to be Lyon.

To set the record straight, I did not abuse my husband never have and never will.

I love my husband no matter the outcome. For better or worse are the vows we took.

All Gary ever wanted was to be loved and I am the one who gives this to him and continues...That will not change...ever....

The county misleads information based on gossip. I am not alone with what they practice here in Chemung. I wish more people would start standing up and speak out that they had enough of the abuse from them. APS/CPS

I pray that no one ever has to go through this...ever...NASGA is a great group who help people with real issues. I pray that NASGA puts an end to this crime!

I tampered with no feeding tubes! What purpose would that serve; it takes weeks to die of starvation, You would think that staff would be able to catch that before he dies right? Hello!!!!!!

The trachea tube had been defective for weeks. After voicing my concerns to staff at CCNF to see the recorded documentaion of the inflation and was told "we know it leaks, it does not hold air" for weeks this went on. Where was the doctor with all this going on?

Thinking back on what I should have done was hotline for neglect.

But I was too kind and gave them them a good faith shake thinking they would do the right thing. WRONG!

So I cut a defective fish line on his trachea to draw attention that Gary is at risk with the defective tube that could not be accessed to inflate air in the balloon and I did this to protect Gary.

There were no arrest made,There are no police reports made abusing my husband.

Is America coming to such plights of ignorance or perhaps it is arrogance that they can not see what is really happening here.

Get the facts straight Chemung County and be honest. Give me back my husband. I ask what you are hiding. What are you afraid of? It can not be Gary and it can not be that you are emotionally compassionately attached for him when you tried to end his life in May.

Sara is not alone in her fight, which is something I think those in power didn't count on!

"Shaw said there had been stonewalling by the county in releasing the medical records that are crucial to his case. Those documents either sustain or refute accusations against Sara Harvey, and he cannot proceed without them, he said.

Thomson said the county opposed the release of Gary Harvey's medical records because Sara Harvey has no legal right to them."

In my opinion, here IS the PROOF from Thompson that the allegations against Sara are a lie, a smokescreen to cover up what is really going on, including cruel inhumane treatment, negligence and worse to Gary a Veteran with court approval.

PUT UP OR SHUT UP!

The county continues to refuse to put up or shut up by withholding the needed information to show that Sara is innocent of all accusations; the county is engaging in serious cover-up, collusion under color of law and worse while Gary is being denied his basic human rights as a US citizen and as Sara's husband.