Winding Down of the Astor Trial 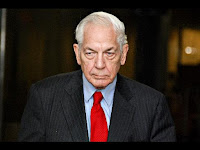 Brooke Astor's son stole millions of dollars and artwork from his philanthropist mother in the last years of her life to enrich himself and his wife, a prosecutor told jurors at the end of a four-month trial.

Anthony Marshall, 85, is accused of taking advantage of his mother, who suffered from Alzheimer’s disease, partly by trying to obtain millions of dollars she intended for charities. Lawyer Francis Morrissey is also on trial on charges he forged Astor’s name on an amendment to her will. Astor died in 2007 at age 105.

The “disturbing” evidence showed “how a son, an only son, could stoop so low as to steal from his own mother in the sunset years of her life in order to line his own pockets and the pockets of his wife,” Manhattan Assistant District Attorney Joel Seidemann told the jury in New York State court today.

Love of money above all else - it's never enough is it?

Just how much money can a person spend and on what?

Anthony Marshall is guilty of sinful and shameful acts, I hope he rots in a cage (what was his wife thinking?) and then burns in HELL for eternity that would be a good beginning to rid our planet of greedy perps.

I don't know, Anon 1. We have all been through being maligned by the court (and those of us who have had press have also had the facts twisted).

I don't know that it's not the same with Anthony Marshall.

He's 85 -- he probably gets up on the witness stand and is confused.

Who benefits if Anthony Marshall is convicted?

Brooke Astor was found on that filthy couch -- whether Anthony Marshall stole her money or not, he did not see to her care.

He's guilty, in my opinion.

Sometimes people who have a lot of money don't realize how much is enough.

Anthony Marshall had more than enough. He didn't need his mother's money.

I am glad to see this trial come to a close.

It turned into a media circus. The headlines were all about Brooke Astor's senility. She would not have wanted that. It got to be very shameful.

I am also torn about Marshall's guilt. Or degree of guilt.

The "how a son, an only son, could stoop so low..." sounds like what an attorney would say about a family member in order to get him/her out of the way and get a guardian in.