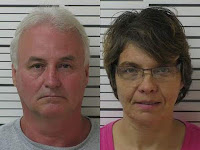 The 49-year-old mother of a severely handicapped 31-year-old man was shocked with a Taser after a pair of standoffs with Levy County Sheriff's Office deputies this week.

The woman was resisting a judge's order to turn over custody of her son to another family member.

The handicapped man's father was also arrested for reportedly assisting his wife in resisting deputies.

The change in guardianship appears to be the result of unanswered financial questions.

William Bennett, 50, and his wife, Lori Bennett were each charged with interference of custody for their son Daniel Bennett and resisting arrest following incidents at their home on Monday and Tuesday.

Court records also show that the formal change in custody and guardianship was made after William Bennett did not respond to four orders to appear in court since July and has not filed the 2008 annual guardianship report for Daniel as required by state laws.

Tasering this woman was not called for.

I agree, Anon. We don't know the circumstances of this fight, but tasering was out of order.

Ah, an attorney named as guardian of the property.

Worked out well for that attorney, didn't it?

Why wasn't the brother named as guardian of the property?

William Bennett exposed himself to this mess but not filing the annual reports and then not going to court when called.

You're right, Anon 3. Bennett should have filed the reports. Not doing so is an indication that something is wrong.

That said, the 31 year-old should have a say on who he wants as his guardian.

This was certainly handled wrong.

However, I'm glad to see a court watching and being proactive.

But, if the guardian had been a professional instead of family, I wonder if the court would have watched???

There's probably more to this story. Especially since an attorney is so anxious to get involved.